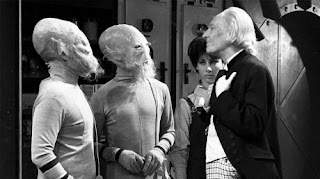 The Doctor, Ian and Susan travel down to the Sense-sphere to negotiate the release of the TARDIS lock from the Sensorites. Already badly affected by a plague that came with the last set of human visitors, some members of the Sensorite community are intent upon killing them as soon as possible.

It has been six months since I last watched an episode of "The Sensorites". That is partly because I simply got distracted by other viewing options, but I think it is also down in part to "The Sensorites" being a remarkably slow-paced and rather sedate serial. Things do happen, and occasionally those things - such as in episode 2 - can get effectively creepy, but in the main it all feels a bit leaden. I think "Hidden Danger" may be the least engaging episode so far. While things do happen, and the plot does move ahead, it simply does not hold the viewer's attention very well.

Part of the problem is the Sensorites themselves. They have a fairly effective facial design, with their tiny eyes and strange upswept beards, but the rubber masks used to create their appearance also muffle the actors' dialogue. This is particularly problematic when the episode chooses to devote entire lengthy scenes to Sensorites standing around debating whether or not to murder the Doctor and his companions. It does not make for particularly gripping television.

It is also rather dull sitting through some obvious plot exposition, in which the Sensorite leader explains how humans came to their planet before and brought with them a deadly virus. They also explain about how some Sensorites drink from one aqueduct and others from another source, and how the aquaduct drinkers keep succumbing to the virus. The audience is left drumming their fingers as Ian drinks some of the aquaduct water and immediately begins coughing before collapsing to the floor. At no point do the Sensorites, Ian, Susan or the Doctor put two and two together and realise the aquaduct was poisoned. I imagine the children of 1964 were as good as screaming the solution at the screen, since it's so egregiously obvious. Early Doctor Who tends to oscillate a bit between being a drama for families and a drama for children. Much of the plot of "The Sensorites" is so simplistic and silly that it seems purposefully designed for children, without much consideration for the older audience also watching.

Susan makes a commendable attempt to stand up for herself, taking control of matters at the episode's opening to negotiate with the Sensorites. It's a bit disappointing to see her fold so quickly, after a quick telling-off by both her grandfather and Barbara, but it is also interesting seeing her latent telepathy come into play. The original character outline for Susan had her demonstrating telepathic powers all the time, but it was quickly removed from the series as they went into production. I assume no one informed writer Peter R. Newman because it's in full use here, and nowhere else in the season.

In the end "Hidden Danger" is all just a bit too silly and a bit too dull. I found the first two episodes were just engaging enough to slip into positive territory, but this third instalment really is not very interesting. It leaves Series 1 with 23 good episodes out of 33, and a quality ratio of 70 per cent.
Posted by Grant at 5:02 PM