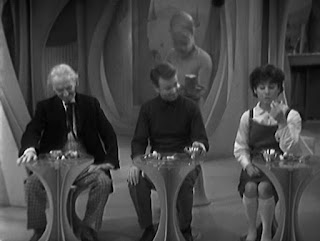 Ian (William Russell) and Susan (Carole Ann Ford) rescue the Doctor (William Hartnell) from the aqueduct, where an unseen monster seems to be stalking the tunnels. Once back in the Sensorite city, however, they are caught up in the Administrator's murderous conspiracy against them.

While the previous episode of "The Sensorites" contained a series-changing shift in the Doctor's behaviour, transforming him from a self-interested old fan to a strongly motivated hero, this fifth part contains pretty much the stupidest plot development the series has included thus far. The Administrator, a zenophobic politician intent on killing all of the humans in Sensorite captivity, goes some way to achieving his aim by masquerading as the planet's Second Elder. He does this by stealing the Elder's sash, since all Sensorites dress identically and they cannot tell each other apart by any means.

I mean come on. Even if we apply a looser story standard to allow for this being a 1960s children's drama, it is a ridiculous plot contrivance. How does a society operate if you don't know who is who? If you cannot recognise your own friends and family? It feels like a weird and nonsensical kind of racism, only it's not the humans muttering that "all you Sensorites look alike" but the Sensorites themselves. What makes this plot development so egregiously off-piste is that even for the viewer the Sensorites look visibly different to one another.

One can also throw in possibly the world's shortest trial scene to add to the stupidity. 'The Doctor is a murderer,' claims one of the Administrator's co-conspirators. 'No he's not,' argues Ian, 'you said he was wearing a jacket and he's clearly wearing a cloak.' 'Yeah,' admits the conspirator, 'I guess you're right,' before being taken away to prison for perjury.

"The Sensorites" has been a remarkably uneven serial, with a few good episodes and a few bad. Whenever it has struggled it has been due to its script. Peter R. Newman is writing to a considerably lower-aged viewership than his fellow writers, and it is making it a rather difficult story to take seriously.

There are a few highlights. Despite the cheapness of their rubber masks, the Sensorites are visually rather effective - barring their silly circular feet. It has been great seeing William Hartnell's Doctor become a more pro-active figure, as well as Susan being given so much more agency than usual. It is a shame that so much of the serial - and this episode in particular - has been so damned shaky.

It all leaves the first series sitting with 24 good episodes out of 35, with seven more episodes to go. The quality ratio slips to 69 per cent.
Posted by Grant at 10:01 AM