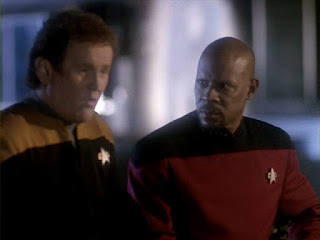 It's 8 January 1996, and time for another episode of Star Trek: Deep Space Nine.

With the Dominion seemingly set to invade Earth, and Starfleet officers guarding every street corner, Captain Sisko (Avery Brooks) becomes increasingly suspicious that all is not what it seems. When he learns that the cut to the Earth's power systems was caused not by changelings but by a team of Starfleet cadets, he realises that there is no Dominion invasion at all but instead a fast-approaching coup d'etat by one of the fleet's finest and most respected admirals.

There is something very slightly askew in "Paradise Lost" that stops the episode from ever reaching its potential. I do not think it is a single element, it is more as if a large number of very small errors and ill-advised choices have gently warped the whole episode out of alignment. Viewed from a distance and it seems perfectly competent and rather thrilling. Viewed up close and it never gels together. The concepts all work but the execution falters. It is still a more enjoyable episode than "Homefront", but there is so much that is squandered.

One of the biggest drawbacks is Robert Foxworth's weirdly leaden performance as Admiral Leyton. To an extent the episode rises and falls based on how much the audience believes in Leyton, and Foxworth does not manage to pull it off. He needs to be an idealist who actually believes that Starfleet assuming control of the Federation is the only solution to saving it from the Dominion, but instead he seems like a self-interested and ambitious despot. The episode's script does its best, putting Sisko and Leyton in a room together for much of the episode's second half, but Foxworth does not manage to draw out the sensibilities that the story needs.

There is also an issue with scale; I am assuming as a result of a tight production budget. The Defiant arrives, under the command of Commander Worf (Michael Dorn), and is immediately challenged by the USS Lakota - which has been informed the Defiant is under the control of changelings. We see a bit of a dogfight between the two ships, but we don't see the fight's resolution. We assume Worf and the Lakota's captain (Susan Gibney) have talked things out, but we're denied the chance to actually see it happen. It also beggars belief that, with Earth on high alert and a Starfleet security officer on damn-near every street corner, there is only one Federation starship patrolling the entire solar system. As I said, it's probably a budgeting issue, but if you are going to tell this type of story you need to be able to afford more than an old Excelsior class model for your space scenes.

The episode boasts one genuine stand-out scene: Sisko is suddenly met on the street by Chief O'Brien (Colm Meaney) - except it's not O'Brien, rather a changeling come to chat with him and gloat. The revelation that there are only four changelings in hiding on the entire planet is a great one, and Meaney does an excellent job playing a smug, jovial antagonist. The problem is that the episode ends with those same four changelings presumably still on Earth, and no one seems too bothered to track them down.

The basic concept of "Paradise Lost" is great, and certainly it manages to push Sisko's dilemma to a believable point - "Homefront" struggled in that regard. The execution just seems let down by some weird choices in what to show and what to tell the audience about afterwards, and in some odd decisions in terms of casting and pace. It is an enjoyable enough episode, certainly much better than the first part of the story, but it's a pretty flawed piece of work. Still, it's the eighth enjoyable episode out of 11 so far in Season 4. The quality ratio rises to 73 per cent.
Posted by Grant at 11:34 AM