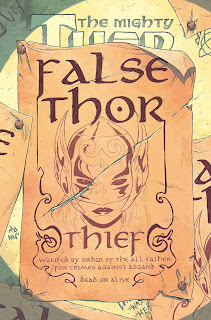 American comic books really need to establish a new means of numbering. It used to simply be sequential, with each individual series running for potentially hundreds of issues and simply changing creative directions and creative teams as it went. Then, as sales declined and publishers started looking for ways to boost their readership, it became apparent that readers were twice as likely to buy an issue number #1 than an issue numbered even as low as #3 or #4. Pretty soon Marvel started going nuts for relaunches and re-numberings, and to be honest DC Comics is not too far behind them.

It's clear at this point that Marvel and DC need to take a TV-style approach, and renumber their key superhero books at the start of every "season". At the moment they're trapped halfway towards that approach anyway, and I think it would help their sales and even their reputations a little if they were to go the whole distance and never publish an issue higher than #12 ever again.

As for this fifth issue #4: Thor's attempts to help the light elves from Malekith's forces do not go as well as she had expected, and there's to time to keep working at it because Odin's put his wife up on trial and the whole of Asgardia is about to revolt. This is a great issue. A lot happens, the pace never lets up, there's a broad range of characters, and it all feels like it is actually going somewhere. Since its latest relaunch The Mighty Thor has felt a little all over the place, as if it's stumbling to re-assert itself. Here it finally feels rock-solid. I'm pleased. (4/5)

Under the cut: reviews of Batman and Robin Eternal, Doctor Who, Robin: Son of Batman, Silver Surfer and Usagi Yojimbo.

The assault on Spyral headquarters goes on for one issue too many: there's simply not enough here to sustain a whole issue - too much of it feels like exactly the same action scenes that were going on last week. Things are redeemed towards the end with a nice bit of foreshadowing for Dick Grayson's return as Nightwing, and a cliffhanger arrival I have been anticipating for months. All up though? This book is treading water this week. (2/5)

Doctor Who: The Eighth Doctor #4

The Doctor and Josie arrive at an English manor in the 1930s, which soon falls under attack from intelligent plant monsters. 'Please be the Krynoids,' I thought, but sadly it was a completely different and slightly less interesting type of monster. This five-issue series (one to go) has been sufficient and generally entertaining without ever being exceptional or worth recommending. I think part of the problem is Mann's decision to make each issue a self-contained little story of its own. Doctor Who isn't Batman or Usagi Yojimbo (see below). It changes setting and characters quite radically from story to story, and there's often not enough room to actually set everything up and tell a decent story too. It lets the book down, because no individual issue satisfies. (2/5)

For the past year Bruce Wayne has been living an entirely new life, oblivious to his past work as Batman and all of the events that such a change entails. One of the results, pretty much unexplored until now, is that he no longer remembers having a son. That's pretty much what this issue is about: Damian Wayne returns to Gotham and to watch over a father who does not even know who he is. It also winds up temporary guest star Nobody's arc within the book, and sets Damian up for the next phase of his life. All of that and some vigilante action thrown in for good measure. Grant Morrison may have created Damian, but it's Gleason and Gray - and, earlier, Peter Tomasi, who really breathed life into the character. He is a sensational protagonist: arrogant, prickly, rude and strangely adorable. (5/5)

Like The Mighty Thor, Silver Surfer is a Marvel book that's just undergone an entirely arbitrary and unnecessary renumbering. Asides from the change in numbers it remains the same book: great stylised art by Michael Allred and breezy science fiction adventure written by Dan Slott. Slott's been pretty open about writing the Surfer as the Marvel version of Doctor Who, and that certainly holds true here with the whole 'companion discovers to her shock she's not the original' scene. It's a little weakly done. Thankfully other parts of the comic are much stronger, including a great plot development that has me keen to read issue #3. (3/5)

A river-side village threatens to flood when a storm hits, and at that exact moment thieves take the opportunity to raid the storehouses. It's Usagi to the rescue - until he discovers all is not what he seems. Stan Sakai has such an exceptional gift for these short comic book stories: simple set-ups, immediately distinctive characters, usually one key plot twist, and a satisfying resolution. More comic books should be like this. Imagine a Marvel or DC title that gave its readers this kind of slickly produced, cleanly developed entertainment on a monthly basis. (5/5)
Posted by Grant at 8:00 AM