Crusade: "The Well of Forever" 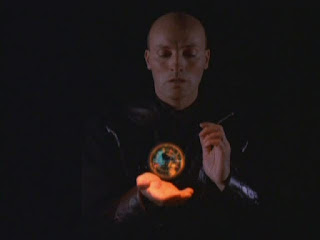 As the Excalibur progresses on its mission to find a cure for the Drakh plague, Galen (Peter Woodward) suggests investigating the mythical Well of Forever. Captain Gideon (Gary Cole) agrees, only to find the Excalibur is no longer under his control. Meanwhile Lt Matheson (Daniel Dae Kim) is scheduled to be scanned by a government representative, as part of Earth's post-PsiCorp governance of telepaths.

I did not hate "The Well of Forever". By no means did I fall head over heels in love with it, but it did not annoy me too often and it occasionally managed to even do something interesting. It certainly uses its regular cast more evenly than the previous two episodes - although there is still a bizarrely strong focus on Galen - and is a huge step in quality from the relatively dire "The Long Road". The only lingering concern I have is this: did I enjoy this episode because it was independently enjoyable, or did I enjoy it simply because it was not as bad as "The Long Road"?

Galen continues to annoy me, although in this episode he does seem a little less of a mystical and frustrating space wizard and more of an actual flawed human being with biases and proper idiosyncrasies. Peter Woodward's mannered delivery of his lines continues to annoy me, although I am assuming it is simply the manner in which he was told to deliver them rather than a fault as an actor more generally.

It is Galen who persuades the crew to accompany him to the mysterious Well of Forever. In order to navigate into deep hyperspace to find it, he slaves the Excalibur's navigational systems to those of his own ship. At first Gideon is happy for this to happen, and even hopes he might get a better glimpses of technomage computer systems. His tune changed when he discovers the Excalibur is now at Galen's mercy; they will continue looking for the Well as long as he wants them to. It creates some nice conflict between the two characters, although the wacky re-scheduling of episodes does lead to some dialogue that simply doesn't make a lot of sense ('Hey Galen, remember that time we did that thing the audience hasn't seen yet?' and so on).

The episode also acts as a nice excuse for some big-scale science fiction spectacle, notably the Well itself - a traditional 'big dumb object' in the Arthur C. Clarke vein - but also a field of jellyfish like alien creatures that drift around in hyperspace. None of these elements are done astonishingly well, but they are a reasonably interesting diversion.

Mr Jones (Michael Beck), the pseudonymous government representative sent to telepathically scan Matheson, seems to have a grudge against the Excalibur's first officer, and his reasons for that grudge are never really made clear. He is intent on having Matheson removed from the ship, but those intentions are deflected by a very trite Babylon 5-esque ruse on Gideon's part. To be honest the entire subplot feels like a waste of time.

"The Well of Forever" is a pretty mediocre episode. I did enjoy it, and certainly I have given the thumbs-up to episodes this average before, but there is a real sense that for whatever reason Crusade simply does not work as a television series. It has a few too many clichés in the mix, and nowhere near enough new ideas or fresh angles. Still, with two good episodes of of three its quality ratio rises to 67 per cent. It's a pretty weak 67 per cent, but there we go.
Posted by Grant at 4:59 PM