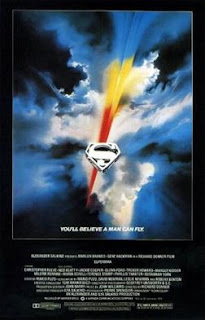 With Warner Bros about to release its widely hyped new blockbuster Batman v Superman: Dawn of Justice, it seemed as appropriate time as any to have a look back over the studio's earlier attempts to bring Superman to the screen. That process begins with Richard Donner's 1978 blockbuster Superman, which was a tremendous hit upon release and led to three sequels starring Christopher Reeve. This first film showcases baby Kal-El's escape from the dying planet Krypton, his arrival and adoption on Earth, his journey to assume the role of Superman while masquerading as 'mild-mannered' report Clark Kent (Reeve) before having his first encounter and battle with criminal mastermind Lex Luthor (Gene Hackman).

Richard Donner's Superman is, for all intents and purposes, the grandfather of the modern superhero film. While there were certainly plenty of screen adaptations of Superman and other heroes before it, it was the first film to adapt a comic as an honest-to-god film. It is not a quick piece of entertainment for children, or a humorous pastiche, but rather a proper Hollywood blockbuster that gives DC Comics' Superman the same attention and respect that Spielberg gave Jaws or Friedkin gave The Exorcist. To a very large extent, Warner Bros' subsequent Batman films, Fox's X-Men movies and Marvel's extensive and growing franchise of interlocked comic book films all owe their existence to Donner's film.

There is a tremendous amount of mystique surrounding Superman for viewers of a certain age. For my own part it was one of the films I watched the most as a child, slowly wearing out a VHS copy through repeated viewings. With that level of familiarity and affection it is sometimes a little difficult to properly assess a film's merits. One thing worth noting from the outset is that while the film does have a tremendous amount to recommend, its screenplay is arguably not one of them. There is an awful lot of Superman that fails to make any sort of sense. In particular the film's climax, in which Superman flies around the Earth repeatedly until its rotation reverses and time flows backwards, feels like a remarkable cop-out. Other small details stand out as well, such as Clark Kent's magical ability to change costumes by some magical means rather than actually taking his suit and shirt off as he always used to do, or Lex Luthor inexplicably surmising that kryptonite is both an actual substance and something that could kill Superman.

The weird plot elements and inexplicable superpowers pale in significance, however, to some of the film's strangest moments. The film opens with a strange black and white reveal of the Daily Planet newspaper building. Later on Superman takes Lois Lane out for a night flight, leading to her recital in voiceover of a weird romantic poem. When Clark throws a mysterious green crystal into the Arctic Ocean, creating his Kryptonian 'fortress of solitude', it leads into a strange psychedelic montage as recordings of his dead father teach him all manner of esoteric space knowledge for several years. Once you start paying attention to the weirder moments in Superman it's staggering just how many of them there are.

There is also the film's slightly odd narrative structure. It takes a surprisingly long time to move from its opening titles to the actual reveal of Superman in costume; something like 45 minutes or so. It then takes another lengthy period of time for hero and villain to meet, and by that point there is only really time left for an extended climax. Part of this structure is due to an original intention for Superman to be a three-hour epic in which Superman would defeat Luthor at the two-hour mark only to have to face down Kryptonian super-villain General Zod (Terence Stamp) in the third. When the decision was made by producers Alexander and Lya Salkind to cut production short and simply make a film out of what they had, the Zod sequences were set back to be incorporated into Superman II and this first film was left with its slightly unusual, oddly hollow storyline. Weirdly, however, Zod's trial to Krypton was retained in this original film, setting up a storyline that - for the moviegoers of 1978 at any rate - fails to go anywhere.

Altogether that seems fairly disappointing, but where Superman excels is in the strength of its performances and the integrity with which it presents the characters. At the centre of the film is Christopher Reeve in his star-making - and also stereotyping - role as Clark Kent/Superman. He brings such an easygoing and wholesome attitude to the character of Superman: relaxed, polite, and consummately professional. As he performs the hole with such a laid-back, comfortable style he makes it incredibly easy for the audience to go along with his story. There is a lot to Superman that one could find silly or laughable, but Reeve delivers such an honest performance that he becomes incredibly easy to accept. He is even more accomplished as Clark Kent, carefully transforming his posture and mannerisms to such a degree that for pretty much the one time it becomes believable that people might not recognise Kent and Superman as the same person. There's one moment in particular - Clark takes off his glasses, straightens up, almost tells Lois he is Superman, and then slumps down and replaces the glasses at the last moment - that is an honest-to-god masterpiece of screen acting. Since 1978 a lot of very respected and talented actors have played superheroes in film. I still believe Reeve's performance here is one of the best we have seen seen.

Margot Kidder is a slightly idiosyncratic Lois Lane. The character had previously been styled very much as a hard-nosed, fierce sort of journalist. Here she's rendered as somewhat goofy. She is easily distracted, doesn't know how to spell, and far more likely to drift off doe-eyed at Superman than in being the driven professional that she's more commonly presented to be. There is nothing innately wrong with Kidder's performance in isolation, but for me it does not properly reflect the character.

A similar accusation could be levelled at Gene Hackman, who plays Lex Luthor more for comedy than drama. Some of it is pretty great comedy. He visibly relishes murdering people, and is overwhelmingly vain, and spends the bulk of the film in a constant state of self-satisfaction. It is a performance packed with little stand-out moments. He's also visibly smart. When he lures Superman into his underground lair, and boasts of a plan to hijack and detonate two nuclear missiles on US soil, he takes no chances. His plan to kill Superman with kryptonite may almost succeed, but he took no chances - the missiles were already on their way when their conversation started. It's Alan Moore's Ozymandias eight years before Watchmen was published. On the other hand quite a lot of the comedy fails to work, with Hackman saddled with Ned Beatty's credulous comedy sidekick Otis who pretty much fouls up every scene in which he appears. It is not Beatty's fault of course. The character is written to be irritating.

The casting of Hackman as Luthor kicks off one of the most prominent trends of superhero cinema: casting respectable dramatic actors as super villains and letting them ham things up to their hearts content. To an extent most of the key villains of Warner Bros' Batman films work underneath Hackman's shadow.

It is also worth highlighting Clark's two fathers. Marlon Brando, famously paid millions of dollars for a few weeks' work, gives a very measured and dignified performance as his biological father Jor-El. By contrast former western star Glenn Ford gives heart and humanity as Jonathan Kent, the farmer who adopts, names and raises Clark to be the best person he can be. Jonathan Kent is a tremendously undervalued character in terms of the Superman story. He is the man who gives Clark his moral centre and sense of honour. In this aspect Richard Donner's film absolutely nails the character. Neither Ford nor Brando appear in the film for long, but they both have a strong impact.

Here's the weird thing with Superman. It may have some really weird segues like night-flying poetry and drug trip Fortress of Solitude montages, and it may regularly have some lazy and ill-placed humour. It may have a slightly flabby and nonsensical plot. Despite all of these drawbacks it works so brilliantly. It's a wonderful film. Christopher Reeve carries it firmly on its back and makes it so entertaining and so watchable. Gene Hackman is visibly having a ball playing Lex Luthor. In between so many individual scenes and sequences bring the Superman comic books to life in really naturalistic and entertaining ways. Superman's first night out on duty, in which he rescues Lois from a falling helicopter, apprehends a gang of bank robbers, rescues Air Force One from crashing and even takes a moment to rescue a kitten from a tree, is just so enjoyable to watch. The film's final shot of Superman flying over the Earth into a sunrise, relaxed and smiling, is pretty much the most pitch-perfect moment of any superhero film ever made. I never tire of watching it.
Posted by Grant at 5:05 PM