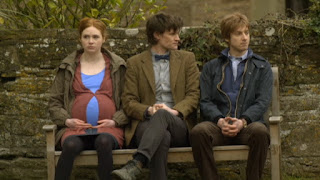 Several years after leaving the TARDIS, Rory (Arthur Darvill) and a heavily pregnant Amy (Karen Gillan) are reunited with Doctor (Matt Smith) again in the sleepy surrounds of Upper Leadworth. Then they fall asleep, and find that they were dreaming, and that they are really trapped inside the TARDIS as it falls towards a deadly cold star. When they fall asleep in the TARDIS, and wake up again in Upper Leadworth, their real troubles begin.

It all brings to mind that old quote by the Chinese philosopher Zhuangzi, about the man who dreamed he was a butterfly and then woke not knowing if he was a man who dreamed he was a butterfly or a butterfly in the middle of a dream that it was a man. That is pretty much exactly the situation in which the Doctor and his companions find themselves here: two realities, one of which is real and the other of which is a lie, and they are forced to choose between them by the mysterious and deeply snarky Dream Lord (Toby Jones).

The two rival storylines in "Amy's Choice" are not in themselves particularly interesting. In one of them the TARDIS is without power and simply being pulled towards a mysterious 'cold star' that will freeze the TARDIS' inhabitants to death within minutes. In the other the residents of a local old people's home in England turn out to be shells for a species of strange, deadly alien creatures. It essentially becomes a zombie movie, with the lurching undead masses replaced by possessed octogenarians. The emotional core of the episode is in Amy choosing between them.

Season 5 has spent a lot of time working on Amy's romantic dilemma. On the one hand there is a future of marriage with Rory, and living in a safe but boring small town. On the other hand there is the excitement of travel with the Doctor in the TARDIS, a romance based less on a love for the Doctor than on a fear of settling down. This tension has picked up in the last few episodes. At the end of "Flesh and Stone" Amy is trying desperately to score with the Doctor. In "The Vampires of Venice" she is having to confront the reality that she really does need to make a choice between her fiancee and her strange new friend. "Amy's Choice" is exactly what it says in the title: this is the episode where Amy actually has to choose which life is the most important to her.

Amy reaches her decision in unexpected and heartbreaking ways. It is actually quite a surprise to see that this episode, which gets remarkably dark and dramatic in places, is the work of popular sitcom writer Simon Nye. His writing here is far removed from his work on Men Behaving Badly. Save for the odd humorous bit of dialogue there is not much here that is actively funny. Instead it is an increasingly tense drama as time runs out in both realities and a choice needs to be made about which one the heroes should choose to end with their deaths. Suicide really isn't a plot element you expect in family television - it's a remarkable feat by Nye that he makes it work as well as he does.

Throughout the episode Toby Jones pops in and out as the seemingly omnipotent Dream Lord. He is perfectly cast and plays the role extremely well. The episode's conclusion hints at a future confrontation between him and the Doctor, however he has sadly never returned. It feels like a small missed opportunity.

Clever ideas dominate this quite excellent episode; one of the very best that Season 5 had to offer. Admittedly you do have to cope with a pretty unconvincing wig and ponytail for part of it, but it's a small price to pay for ideas this good. "Amy's Choice" is a wonderful episode. We're now seven episodes into the season with six of them being good. The quality ratio rises once again to 86 per cent.
Posted by Grant at 5:01 PM