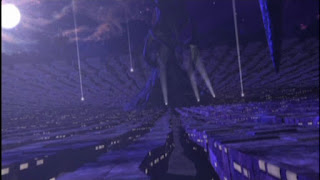 It's 19 July 1998, and time for more Babylon 5; in this case the second of TNT's made-for-television films, Thirdspace.

While returning to Babylon 5 Commander Ivanova (Claudia Christian) and her squadron discover an enormous alien object drifting in hyperspace. They bring it to the station, where initial tests show it to be more than a million years old. While a pair of scientists investigate and research the object, people on the station begin to fall under its power. Some dream of a mysterious alien city, others begin to lose their minds. Before long everyone is in mortal peril if Captain Sheridan (Bruce Boxleitner) cannot destroy the object, and the gateway to 'thirdspace' within it.

Shot immediately following the conclusion of Season 4, and narratively wedged somewhere in the middle of it, "Thirdspace" sees Babylon 5 re-tooled as a Hollywood action film. It boasts punch-ups and martial arts fights, big visual spectacles, one of the series' biggest-ever space battles, and more CGI in 90 minutes that was squeezed into all 22 episodes of Season 1. It is big, loud and rather stupid, but it's also rather silly fun.

I am a sucker for 'big dumb objects', a common trope in science fiction stories where some people discover or encounter a massive, inexplicable alien artefact. It could be buried on a planet, or just floating in space. Arthur C. Clarke famously used it twice; first in his short story "The Sentinel" and its subsequent adaptation 2001: A Space Odyssey and later in his popular novel Rendezvous with Rama. It's a wonderfully effective technique, creating an ominous mystery and immediately generating tense drama. It certainly works here. The monolithic object dragged in through hyperspace is so large that station crew need to expand the size of the jump gate to let the object through. It then sits there, silent and deeply threatening for the bulk of the film.

Its effect on the station is immediate. Local telepath Lyta Alexander (Patricia Tallman) seems to be under some kind of alien control, another common trope of science fiction that Babylon 5 had by-and-large avoided in the past. Others like Ivanova and Vir Cotto (Stephen Furst) share dreams of an alien city dominated by a creepy biological tower. Incidents of violent behaviour are steadily growing the longer the artefact remains in Babylon 5's vicinity. This is all rather good, giving the episode a sort of H.P. Lovecraft cosmic horror vibe.

So the set-up is great, and the tension builds very nicely, but sadly the resolution is nowhere near as effective. The situation is resolved with Sheridan flying a jetpack through a space battle to detonate a nuclear warhead inside the artefact. It's Michael Bay-level over-the-top action used to resolve what is basically a horror movie. It's enjoyable on its own goofy merits, but it does not effectively match the rest of the film. It winds up diminishing "Thirdspace" somewhat: it's still enjoyable, but a better movie is clearly visible in the background.

The episode is not helped by an explanation of the artefact coming via a massive information dump delivered by a possessed Lyta. I am always a fan of showing and not telling, and the scene in question is entirely about telling. I am also happy to leave things unexplained. I think if the aliens on the other side of the artefact's gateway had been left entirely unexplained, "Thirdspace" would have been a lot more effective and dramatic. The way it is presented, with Lyta giving a long explanation with accompanying flashback footage, sort of sucks the energy out of the film's climax.

With these criticisms in mind I still think I prefer "Thirdspace" to "In the Beginning". This is at least a solid attempt to make a film, and it feels like a film. "In the Beginning" felt like a cross between an in-episode flashback and a history lesson. So while there's much disappointment to be found here, it is simply the disappointment that this episode is good rather than brilliant.
Posted by Grant at 7:14 AM