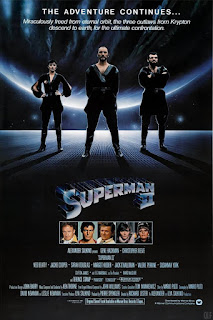 General Zod (Terence Stamp), the Kryptonian villain who was prosecuted by Superman's father Jor-El, escapes the captivity of the Phantom Zone and arrives on Earth. It is up to Superman (Christopher Reeve) to save the world - but Superman is gone after falling in love with Lois Lane (Margot Kidder) and sacrificing his powers.

Two years after the original Superman became a box office smash, the franchise continued with a second popular instalment. Its popularity with audiences masked a tortured production process behind the scenes. Much of the plot was originally developed as part of a super-long single film. When the decision was made to split the story into two films, the shoot continued for a while despite director Richard Donner's relationship with his producers rapidly deteriorating. Eventually the plug was pulled on production until the first film could be released.

That left Superman II with an enormous problem. Here was a film that was half-completed, but the producers did not want to work with its director any more. When Richard Donner left, he took with him half of the crew. Gene Hackman refused to return in solitarity with the director, while Marlon Brando - then in the middle of suing the Salkinds for their failure to pay him his fee for playing Jor-El in the first place - refused to even allow already-shot scenes to be used.

The solution was to hire another director: Richard Lester, who only agreed to take up the job because the Salkinds promised to finally pay the money they owed him following a lawsuit over his directing The Three Musketeers for them back in 1973. It was up to Lester to shoot enough additional scenes to complete the narrative while working around a lack of Jor-El and Lex Luthor with stand-ins and sound-alikes. The end result of Lester's efforts is a slightly off-putting Frankenstein's Monster Superman movie, in which scenes contain strikingly different tones and senses of humour, some of the actors visibly get thinner and fatter from one scene to the next, and in a few cases even use footage from the original Superman to paper over a lack of new shots.

Ultimately Superman II is a lot like Superman, in that there are scenes that work and scenes that do not. The overall storyline is much stronger, replacing a fairly late-in-the-day property market scheme by Lex Luthor (Hackman) with three super-powered Kryptonians invading and attempting to take over the Earth. It is also helped by three great performances by Terence Stamp, Sarah Douglas and Jack O'Halloran as Zod, Ursa and Non. The film's best scenes actually detail their gradual arrival on Earth, from an encounter with astronauts on the moon, to a small American town, and finally to the White House. Stamp is particularly strong, giving Zod a very calm, aristocratic, almost fatherly persona. He is one of my all-time favourite film villains, and certainly one of the most outstanding in a film of this nature.

Gene Hackman is highly enjoyable in his scenes, all shot back as part of the Superman shoot, and definitely adds a lot to the film despite his supporting position. Margot Kidder seems slightly off in her newly shot scenes. She is visibly thinner, and her acting seems a little broader and more exaggerated. The constant jump back and forth between her Superman shoot and Superman II shoots scenes is slightly disruptive. Christopher Reeve continues to form a rock-solid performance as Clark Kent/Superman, and helps to paper over many of the film's weaker moments. His climactic street battle with Zod, Ursa and Non is great, although it does occasionally veer into some weirdly placed comedy.

The comedy is a problem for the film. A lengthy sequence sees Clark and Lois get dispatched to masquerade as newlyweds to research a Daily Planet expose on a Niagara Falls. The scenes are an awkward combination of unfunny attempts at humour mixed with some very low-rent super heroics. To his credit Reeve gives one hundred per cent in every scene he's in, and no matter how silly those scenes might be.

Superman II is very much like Superman in that some scenes work and some scenes fail, and while the overall story is unsatisfying it's key cast manage to overcome the faults to a fairly large extent. The strength of the Zod versus Superman conflict in the third act ultimately pushes this sequel over the original in terms of quality, but to be honest it is a closely-run thing. It's an enjoyable but critically flawed blockbuster. Given the circumstances of its production it's a near-miracle it was watchable at all.
Posted by Grant at 6:46 PM