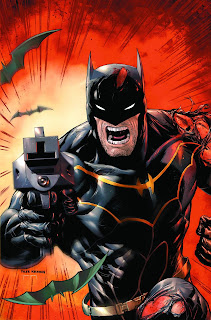 When it is at its best, Detective Comics is one of the greatest superhero comic books. It's a Batman title, but it is supposed to have a more investigative bent. Over in Batman the Caped Crusader can fight colourful villains, travel around the world, have supernatural encounters or even alien encounters. By contrast Detective is always about Batman as 'the World's Greatest Detective'. It is a moodier book, more about sneaking around in alleyways solving crimes than in fighting monsters or super-powered antagonists.

That is why I am really digging "The Bronze Age", the current story arc running in Detective Comics. A serial killer is stalking Gotham, kidnapping innocent people, and disguising their dead bodies as iconic historical figures. It seems to have something with the bronze statues around Gotham - statues like one would find in any city - and as Batman investigates the body count begins to rise sharply.

Peter J. Tomasi is writing a storyline that has been rock-solid so far, with twists and turns and great characterisation. Batman is still being performed by Jim Gordon, who brings a particular and rather fresh attitude to the character. In the suit or out of it, he is always going to be a police detective first and a superhero second, and that's a really refreshing style. The art by Fernando Pasarin and Matt Ryan is similarly strong. There's nothing here that pushes the book into 'classic' territory, but it is an immensely satisfying read. (4/5)

Under the cut: reviews of Amazing Forest, Batman and Robin Eternal and We Are Robin. 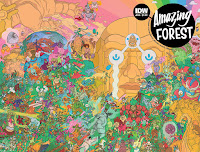 I was really impressed with the first issue of Amazing Forest, in which writers Erick Freitas and Ulises Farinas teamed up with four different artists to tell wonderfully weird short comic stories. This second issue is not quite as accomplished, I think because it's focused on comedic strips this time around. The highlight for me is "Stardust", illustrated by Sean Pryor, which acts as a strange little riff on famously terrible writer/artist Fletcher Hanks. The other three strips aren't quite as accomplished.

Red Robin and Dick Grayson finally manage to ascertain Mother's new plan, while Harper's links to the Batman take on an awful new dimension. Some answers are given here, which is always reassuring in this kind of rapid serialised story, and the stakes are raised considerably. It does feel as if we might be building to some sort of climax. A flashback in the middle of this issue provides a very welcome scene for Bruce Wayne's Batman. I've been missing Bruce over recent months - this was a nice reminder of why he's the best of all the superheroes. My only problem is with some of the artwork - just what age is Tim Drake supposed to be in the New 52? Here he looks 30. (3/5)

Sometimes an idea comes out that seems obvious, but it works because despite being obvious it's also a perfect match for the material. That's the case here, where Lee Bermejo kicks off a new storyline in which a growing gang of self-made Robins encounter a growing gang of self-made Jokers. It's an idea that's occurred before, in the TV animated series Batman Beyond, but as far as I'm aware it's the first time it's made it to the present-day DCU. New villain Smiley is well thought-out and a great match for series lead Duke Thomas. I'm really keen to see where this storyline goes. (4/5)
Posted by Grant at 8:33 AM