Doctor Who: "A Desperate Venture" 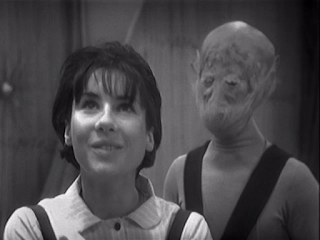 It is 1 August 1964, and time for another episode of Doctor Who.

The Doctor (William Hartnell) and Ian (William Russell) are lost in the tunnels beyond the Sensorite city, but may have finally hit upon the source of the poison that has affected the city's water supply. Susan (Carole Ann Ford) and Barbara (Jacqueline Hill) launch a bid to rescue their friends. The City Administrator has Carol (Ilona Rodgers) kidnapped in a last-ditch attempt to overthrow the First Elder's rule.

"The Sensorites" comes to a close with a remarkably dense episode that packs in about as much plot as two or three prior episodes combined. There is Carol's kidnapping and rescue. There is Barbara and Susan's attempt to locate and rescue the Doctor and Ian. There is the Doctor and Ian's discovery of a second group of humans hidden on the planet, and their attempts to safely return them to the surface. Then there is still the obligatory wrap-up and farewell scene - all in the space of 25 minutes.

It is particularly nice to see Barbara and Susan get pro-active, and use one of the Sensorites' telepathic communication devices to mount their rescue mission. Barbara - back after a two-week absence - heads down to the catacombs with John (Stephen Dartnell). Susan remains back in the city with a map. They communicate telepathically using the Sensorite technology. It is a great sequence of scenes, combining some solid science fiction with a pro-active attitude to the series' two female leads. I am not sure they have been so well used to date. Susan in particular has benefited from a lot of good writing in this serial. She has become much more self-assured and confident. It is a shame that, now that the character is working so well, that she only has three more serials before she departs the series.

The Doctor and Ian's discovery of an entire group of humans hidden in the catacombs, who have been poisoning the Sensorites for years, feels a little bit rushed. There was certainly material here for an entire extra episode had the production team wished it, and without it this all feels remarkably superficial and hurried. It does wrap up the poisoning story arc, but perhaps not in as satisfying a manner as it deserves.

The City Administrator's plot is also resolved in a very rapid manner, but in this case it feels perfectly fine. Carol is kidnapped. John, Susan and Barbara mount a rescue. The Administrator's plot is foiled. It is just enough to cap that storyline without wasting time on scenes of confrontations, or capture, or defiant arguments. We learn via dialogue the Administrator is to be banished to the city, and in this case that actually feels like enough to make a satisfying ending.

It has been very enjoyable watching the Sensorites develop into an entire society of people over the course of this story. They entered the serial as ominous alien monsters, but were gradually revealed as an interesting and unusual society. While the series will do a much better job with these kinds of 'aliens as people' characters in the future - the Silurians immediately come to mind - for a first effort the Sensorites really are quite admirable.

This was a really enjoyable episode. It is the 25th good episode out of 36, giving Series 1 a quality ratio of 69 per cent.

This episode ends with one of the most random and unimpressive cliffhangers so far: Ian makes a light joke about the Doctor's ability to control his TARDIS, and the Doctor flies into a rage and insists he is kicking Ian and Barbara out at their very next stop. I find it very difficult to take that threat seriously.
Posted by Grant at 9:27 AM