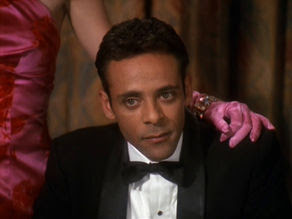 It's 27 November 1995, and time for another episode of Star Trek: Deep Space Nine.

A transporter accident forces the signal for several members of the Deep Space Nine crew to be stored inside the station's computer systems. While the main system is completely filled up with the neural patterns of the crew, their bodies are shunted into Quark's holosuite - and into Dr Bashir's (Alexander Siddig) 1960s espionage simulation.

Deep Space Nine was always fairly resistant about making holodeck episodes. They were the bane of The Next Generation's existence, with some calamity trapping characters inside the Enterprise's holodeck at least once a season - certainly with an alarming enough rate that one wondered why the technology was not declared illegal and retired from use. Introducing such an episode here sets off some initial alarm bells, but thankfully "Our Man Bashir" emerges as a brilliant - and brilliantly funny - episode.

The episode works for a couple of reasons. In one minor way it works because the crisis that Bashir has to resolve occurs not because the holosuite has malfunctioned, but because a disaster elsewhere has required it to be repurposed for something else. His simulated adventure is now populated by the images of Dax (Terry Farrell), Sisko (Avery Brooks), Kira (Nana Visitor), O'Brien (Colm Meaney) and Worf (Michael Dorn). If one of them die in the game, their bodies will never be able to re-transport into existence. While Odo (Rene Auberjonois), Eddington (Kenneth Marshall) and Rom (Max Grodenchik) scramble to fix the situation on the outside, Bashir has to play his spy game on the inside without stopping, turning on any safety features, or getting any of the characters killed. He is playing a James Bond pastiche, so keeping everyone alive is actually a bit of a challenge.

This is an episode where you can see the cast having a whale of a time, and their enjoyment is rather infectious. Bashir makes for a great Bond, Kira a wonderful Russian agent, and O'Brien a mean-spirited henchman. The standout for me is Sisko re-envisaged as a super-villain. Avery Brooks has always given a fairly robust, theatrical performance, and as Dr Hippocratus Noah he gets the chance to act as loudly and flamboyantly as he can. It's really very funny to watch.

Putting the Deep Space Nine crew into the roles of a 1960s spy movie is humerous enough, but the episode's master stroke is the insertion of Garak (Andrew Robinson) as a sort of incredulous observer to Bashir's game. Garak is, of course, a former agent of the Obsidian Order - an actual spy. Watching his caustic, bitchy responses to the unfolding adventure is about as perfect a thing as I can imagine for the episode. Robinson and Siddig have always performed well together, and they get some of their best material here. It runs from broad buddy comedy to momentarily tense drama when Garak wants to shut the system down and Bashir is prepared to shoot him to prevent that from happening. Theirs is one of the series' best character relationships, and it pushes "Our Man Bashir" from being an amusing pastiche to a properly brilliant episode.

We are nine episodes into Season 4, and seven episodes have been good. This is definitely one of them. The quality ratio rises to 78 per cent.
Posted by Grant at 7:30 AM