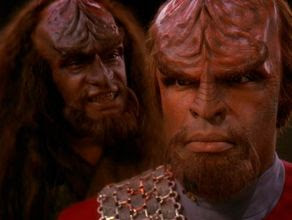 It is 12 February 1996, and time for another episode of Star Trek: Deep Space Nine.

Klingons are undertaking suspicious military exercises on the border of the Bajoran system. Meanwhile Commander Worf (Michael Dorn) earns the ire of Captain Sisko (Avery Brooks) when he attempts to assist his brother Kurn (Tony Todd) in committing ritual suicide by stabbing him in the chest with a knife.

What now, what the hell? "Sons of Mogh" is a damned peculiar episode. Sisko is furious that Worf attempted to murder his own brother. He chastises Worf, and points out that while he is aware of and respects alien cultures, Deep Space Nine is a Federation facility operating under Federation laws. Sisko is correct, and as a result murder is somewhat frowned upon. So why the hell is Worf shouted at, and then dismissed from Sisko's office? I am reasonably certain he should be on his way to a holding cell in advance of a criminal trial and a dishonourable discharge.

I am getting ahead of myself. "Sons of Mogh" features the return of Worf's Klingon warrior brother Kurn, last seen in The Next Generation's "Redemption II". Since Worf's exile from the Empire in "The Way of the Warrior", Kurn has been ejected from his high council position, lost all of his lands, and been resoundingly dishonoured across the Empire. He turns up at Deep Space Nine blind drunk and demands Worf commit a form of ritual murder to release him from the physical world and enable him to regain his honour in the afterlife.

That is a pretty bold concept for an episode, so credit where it is due to writer Ronald D. Moore. In terms of execution, however, the episode falls around all over the place as drunkenly as when Kurn arrives on the station. Worf initially agrees to undertake the ritual of 'Mauk To'Vor", and indeed plunges a Klingon dagger deep into Kurn's chest. It's only a last-minute intervention by Lieutenant Dax (Terry Farrell) that saves Kurn's life, much to his resentment and shame.

From there the episode turns into a weird family drama where Worf finds Kurn a job working security on the station, but Kurn is still too suicidal to do his job properly. In the end Worf has Dr Bashir (Alexander Siddig) erase Kurn's memory and sets him up in a new life as an amnesiac with a different Klingon family. I am not sure how that even works in terms of Klingon honour and family obligation. Worf seems so fixated on his own culture and rituals, yet after the first attempt at killing Kurn he spends the episode running around trying to avoid going through with it a second time. His memory-erase solution strikes me as actively dishonourable, since it involves robbing his brother of his own identity, doing without his knowledge or consent, and denying him the ritual death he has specifically demanded in accordance with Klingon law.

On top of that there is the question of Dr Bashir's ethics. I simply refuse to believe Bashir would do it. It does not match the actions of a professional medical practitioner, and it does not match Bashir's previously demonstrated personality and ethical viewpoint. In the end this is one of those occasional Star Trek episodes - like "Tuvix" over in Voyager - where a character does something utterly out of personality and fairly repellent, and yet we viewers are forced to simply accept they did it and try not to hold it against them in subsequent episodes.

While it is always a pleasure to see Tony Todd on screen - and this is his second character this season, following "The Visitor" - another big problem with "Sons of Mogh" is that it simply is not very interesting. A subplot involving the Klingons mining the border of Bajoran space should be a huge diplomatic flare-up, but instead it is effectively dealt with by the end of the episode with no further repercussions in the air. The Worf/Kurn storyline, which should if nothing else generate some strong emotional drama, ultimately feels a little listless and flat.

Another less-than-average episode for Season 4. We're now 14 episodes into the season with nine good episodes. The quality ratio slips to 64 per cent.
Posted by Grant at 5:01 PM