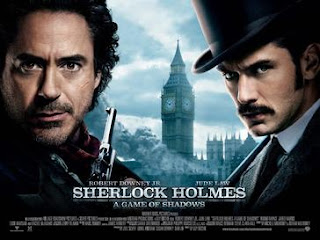 Sherlock Holmes (Robert Downey Jr) is hot on the trail of criminal mastermind Professor James Moriarty (Jared Harris), and intent on revealing and preventing the devastating plan he has for all of Europe. When his investigations grow too close, however, it is not only his own life that is put in peril but that of his former partner Dr John Watson (Jude Law).

A good sequel is a wonderful thing. There is no need to spend time introducing characters and establishing a tone since they have been introduced and well-established already. Instead - in the best kinds of sequels - there is scope to expand on the characters, experiment with where to push the tone, and find all manner of fresh and unexpected angles on the material. Generally speaking few sequels match the original film, since a temptation to hew closely to what is already established often leads to a lack of imagination, and a tendency to simply repeat now-familiar beats and tropes. Thankfully A Game of Shadows is up to its task, bringing back the chemistry and charisma of Guy Ritchie's first Sherlock Holmes film while both darkening its tone and expanding its scope.

It's off across Europe for Holmes and Watson this time, with the duo quickly leaving London for the English countryside, then Paris, Germany and finally to Switzerland for Holmes' legendary encounter with Moriarty at the Reichenbach Falls. It boasts a much grander and more complex story than the first film's, and it brings with it much higher stakes. One major character from the first time is dead before the opening titles. Another almost loses their life and needs resuscitation when their heart stops. By the climax it seems evident that no solution to the adventure is available but one that involves enormous self-sacrifice.

This is not simply a Sherlock Holmes with a higher body count, it's a Sherlock Holmes that hurts. The fights are more savage and the injuries more extreme. While the first film saw a Holmes who was challenged by the mystery presented to him, this second instalment sees him desperate: the odds of success seem smaller and smaller the further the film progresses. It all adds to the film's ominous tone - a tone that's reflected by Hans Zimmer's musical score. The same riffs and melodies are there, but the arrangements and the keys are threatening and heavy.

Jared Harris makes an exceptional Moriarty, turning this eerily calm and confident university professor into a quite frightening figure. He murders without hesitation. His mind visibly equals Holmes' - and in some moments clearly exceeds it. Harris plays it all with a sort of vile, intolerable smugness. As a viewer you desperate want Moriarty to lose. You actively want him to get punched in the face. He is an excellent antagonist for Robert Downey Jr's Holmes - the two are beautifully matched, and their scenes together are wonderful.

Both Downey and Law slip back into their old roles very comfortably, giving the characters a very welcome closeness and sense of humour. If anything their traits have been enhanced. The bickering is sharper and funnier, the homo-erotic subtexts feel more overt and pleasing but also very natural - at one point they dance together at a ball while discussing strategy, which is pretty much the most wonderfully charming moment of both films.

Noomi Rapace plays the film's primary female lead, the gypsy Simza, who thankfully never turns into a romantic foil but instead a genuinely competent and interesting supporting character. Stephen Fry pops in to play Holmes' older brother Mycroft, which is one of the canniest pieces of casting in Hollywood I can remember. He does not really play much outside of the sorts of overly smart, condescending comedy roles from which he's made his career, but here it's pitch-perfect and one of the film's highlights. Kelly Reilly returns as Watson's wife Mary, getting more to do and managing to make quite a lot out of her part. She is a very underrated factor in the success of these films.

Some of the film's action sequences are particularly commendable, including a desperate chase through the woods in Germany and a wonderfully silly duel at a distance between Watson and a trained sniper. Certainly it feels as if A Game of Shadows is a more action-oriented film than Sherlock Holmes, but that is not to its detriment. It really does feel like the perfect sequel: just as good as the original, with a bit of a fresh angle, a new story and some great new characters. A third film has been in development but has not to date made it to active production. One can hope. I feel there's plenty more potential for this take on Holmes and Watson, and it would be a shame to end things when they had been so wonderfully enjoyable.
Posted by Grant at 11:06 PM