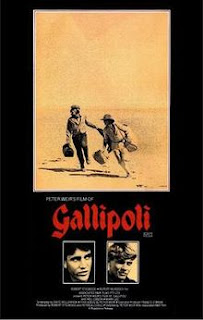 Peter Weir's 1981 war drama Gallipoli is a stunning film, widely acclaimed and rightfully considered today to be one of Australia's all-time best. It is many things at once: a historical account of a military campaign, a personal drama about two young men's friendship, and a powerful comment on the futility of war. It is one of those rare films that I think everybody should aim to see at least once. If you are like most viewers, that one viewing will not be forgotten in a hurry.

The films opens in 1915. Mark Lee plays Archie Hamilton, an eighteen year-old sprinter dazzled by the propaganda that is pulling young men across Western Australia into fighting in the Great War. At a racing event he meets Frank Dunne (Mel Gibson), a hard-up former railway worker. Together they make the journey from the country into Perth, where Archie persuades Frank to join him in enlisting for the war. After training in Egypt, they are then dispatched to the Turkish coast for an advance against the enemy at Anzac Cove.

The Gallipoli campaign is a key part of Australia's national identity, transforming what was a military failure into an iconic event in the country's development as its own nation. As such it tends to bring with it a lot of patriotism - which sometimes slides unattractively into nationalism - as well as a fair amount of needless mythologising. Weir, working with writer David Williamson, manages to avoid a lot of the mythology by making his film a tight character drama. The war casts an unavoidable shadow over the film, but by keeping the focus tightly on Archie and Frank it becomes more of a character drama than a war story.

Both Mark Lee and Mel Gibson are outstanding in the lead roles. Gallipoli was an early career peak for Lee. Gibson, who came to the film at the early stage of a huge international career, delivers some of the best work of his life. It's arguably his strongest-ever performance, and a reminder that an actor best known now as the butt of jokes and widely reviled via the tabloid newspapers was once one of the most promising actors Australia ever had. Both actors are equally comfortable playing up the comedic moments as well as the overriding drama. Australian film stalwart Bill Hunter is also remarkably strong as Major Barton, a calm and thoughtful man placed in the impossible position of sending men into the field to certain death. His torment is visual and effective.

The broader war experience is illustrated by three of Frank's friends, infantrymen from Perth whose war-time experience runs parallel to Frank's. The film is rich in small details: training in Egypt, farewell balls, the near-inedible food, and the crushing boredom on the front that is occasionally interspersed by moments of terrifying panic. If there's a criticism to be made it's that the story sometimes buys in to the idea that the failures of Gallipoli were the fault of dismissive British commanders. It's really the only part of the film that slips significantly into mythology rather than reality.

Weir and Williamson take care to criticise the war as people flock towards it. On more than one occasion Frank openly questions the sense of the conflict: no one can explain how the war started, why it is being fought, and why it is important for Australians to go and fight. All he receives in response are insults and claims he is a coward. While the focus of the film is in Frank and Archie's friendship, the film's blunt condemnation of war is palpable.

While the film does have a musical score composed by Brian May (the Australian composer, not the rock guitarist) the music is dominated by French electronic composer Jean-Michel Jarre's iconic "Oxygene". It makes for an odd contrast between early 20th century life and late 1970s electronica, but it is used very effectively.

Gallipoli comes in gently, and takes its time to establish characters and their friendships. It moves inevitably closer to Anzac Cove, until it finally punches the audience in the face with one of the most abrupt, powerful and upsetting climaxes imaginable. A lesser film would close on a moralistic epilogue, or a gently fluttering flag. Gallipoli ends precisely when the cut hurts the most. It leaves the audience with a wound. It's a difficult film to forget.
Posted by Grant at 7:19 AM