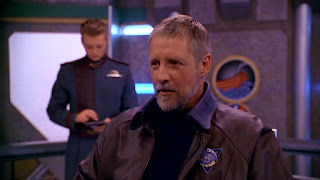 It's 3 January 1999, and time for another Babylon 5 made-for-television movie.

Just over a month after Babylon 5 aired its final regular episode, it returned to TNT with one more TV movie. Written by J. Michael Straczynski and directed by series regular Mike Vejar, the film returns to the Babylon 5 universe five years after Sheridan left the station for Minbar. To be honest "A Call to Arms" is less of a self-contained film and more of a slightly askew pilot episode. While it only features a handful of characters from the sequel series Crusade, it sets up its entire back story and creative direction.

While President Sheridan (Bruce Boxleitner) is inspecting the Interstellar Alliance's new battlecruisers - the Victory and the Excalibur - he receives a strange message in a dream from the technomage Galen (Peter Woodward). It leads him back to Babylon 5 and into contact with Earthforce Captain Anderson (Tony Todd) and alien thief Dureena Nafeel (Carrie Dobro). Together they embark on a mission to stop the villainous Drakh, former servants of the Shadows, from destroying all life on planet Earth.

After TNT purchased the broadcast rights to Babylon 5 for a fifth and final season, they clearly wanted to capitalise on the expense. In addition to commissioning 22 episodes of the regular series they also ordered four TV movies - "In the Beginning", "Thirdspace", "The River of Souls" and "A Call to Arms" - and immediately set J. Michael Straczynski to develop some kind of series sequel. That series became Crusade, which premiered on the station the following June. With that series coming I suppose it made sense to dedicate the final TV movie to setting it up and previewing its premise, but it does made for a pretty weird film as a result.

The core problem is that it doesn't feel like a film. It feels like what it is: a TV pilot episode, designed to hook the viewer in on the characters and the story and get them tuning in every week. There isn't a really solid story structure going on here. The first half takes it time setting up the Excalibur, the starship setting of Crusade, as well as a few supporting characters like Galen and Dureena who will transfer over to the main series. The climax leaves an open-ended problem for Crusade to solve: the Earth has been infected with a virus and the Excalibur will set out into the galaxy to find a cure before everyone on Earth dies. That's a premise that may seem remarkably similar to anybody who ever watched Starblazers (aka Space Battleship Yamoto) as a child. In between the first half and the conclusion is a lot of space-based action that simply feels like any number of Season 4 Babylon 5 episodes.

It's nice to see Bruce Boxleitner back, made-up and styled to look a little older and wearier - it's a look that suits the character well. He's in top form here, back to the sort of character who made Seasons 3 and 4 so watchable as opposed to the weirdly impotent bureaucrat he became in Season 5. Also returning are Tracy Scoggins as Lochley, who doesn't get a lot to do, and Jerry Doyle as Garibaldi, who looks as if he's spending the whole film wincing with boredom and thinking of his pay cheque.

Some of the guest cast are quite strong. Tony Todd is always watchable, even if Anderson is a highly stereotypical character. Carrie Dobro is promising as Dureena: she's the sort of tough alien thief who carries around a bunch of knives and has an instinctive distaste for authority. Like Anderson the character is constructed out of clichés, but like Todd Dobro finds a path through the material to make things work. Less impressive is Peter Woodward as Galen, yet another one of Stracyznski's plummy-voiced, overly theatricalised English-accented characters to sit alongside Marcus Cole and Byron and irritate all but the least discerning of viewers. Galen is a technomage, one of an order of space-travelling wizards who use hyper-advanced technology to generate their magic. It seemed a silly idea all the way back in Babylon 5's second season when they were first presented. It still seems a silly idea now.

Technically the film is fairly impressive. Some new visual effects really stand out, like the re-designed jump gate imagery, and generally the film looks rock-solid visually. Evan H. Chen takes over from Christopher Franke as composer, making this the first Babylon 5 production since the original pilot film to not use Franke's music. It takes a little getting used to, but Chen's score is actually quite appealing and certainly distinctive. He uses a lot of what sound like traditional Asian instruments in his compositions, which often create some quite striking moments. He continues as composer through Crusade, further impressing on how much this film is a pilot and not a self-contained movie.

How I ultimately felt about "A Call to Arms" really did hinge on how I perceived it as a production. As a reasonably self-contained film it's a bit of a mess: broadly enjoyable in places, but not very satisfying. As an introduction to an all-new series it works quite a bit better. I am happy to give it more latitude because I know some of these hanging threads might get picked up down the line. (That said, I do know going in that Crusade was cancelled before TNT even aired its first episode, so I'm aware there's not much time in that series to answer anything at all.)
Posted by Grant at 8:14 PM