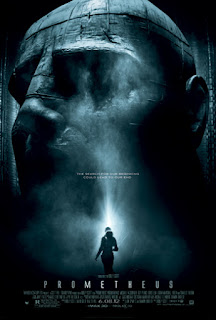 For the past few weeks I have been slowly re-watching the entire canon of Alien and Predator films, including the two Alien vs Predator movies that crossed them over. The final film left to review is Ridley Scott's Prometheus, which burst into cinemas in 2012 cresting a wave of frenzied anticipation and limped back out under the weight of countless negative reviews.

One could really divide the reputation of Prometheus into two halves of 2012. Before the film come out it was just about the most eagerly anticipated science fiction film since George Lucas had returned to Star Wars - and pretty much for the same reason. Original Alien director Ridley Scott had returned not only to the Alien franchise but science fiction generally. As the director of Alien and Blade Runner he had a near-unassailable reputation for building gorgeous fictional worlds, and the idea of a third SF feature from him seemed an outstanding and momentous occasion.

Once the film was actually in cinemas, however, that tune changed pretty quickly. Prometheus is actually a really good example to show people when explaining that it won't matter if a film has strong direction, beautiful photography and a cast of A-grade actors working to the best of their abilities if that film does not have a good screenplay. Prometheus has a messy, unworkable script that requires smart characters to be stupid and audiences to not care about logic.

In Prometheus the discovery of multiple ancient carvings all pointing to a single distant star system leave two scientists (Noomi Rapace and Logan Marshall-Green) to embark on a corporate-funded mission to the moon LV-223. They expect to find the aliens who created the human race. Instead they stumble upon a long-dormant mission to end it.

In the film's defence it is beautifully presented. The production design is beautiful, from the broad vista on the alien planet to the fine details like the Weyland Industries logo embedded in the android David's fingerprint. Some shots feel like moving oil paintings. Ridley Scott has always been a visual director, but Prometheus is one of his most beautiful works. It really stands out and lingers in the mind.

The cast are also about as strong a group of actors as one would expect to assemble for this kind of science fiction horror. The immediate standout is Michael Fassbender as David: he does an outstanding job of creating a character who seems friendly and supportive at first, but gradually becomes more threatening and less trustworthy as the film goes on. The genius of the character - and in this case it really is helped by the screenplay - is that David himself never really changes. He is always an antagonist figure in the film, but circumstances shield the audience from that fact for much of the running time. Noomi Rapace is strong as Dr Elizabeth Shaw, whose quest to meet the aliens who may have created the human race drives the story along. Other actors, including Idris Elba and Charlize Theron, give a lot of personality and depth to their characters even when the screenplay in their cases only draws in the broadest of strokes.

Where the film draws close to collapse is in its dreadfully inconsistent screenplay. Jon Spaihts' original draft was a direct prequel to Alien. It was set on that film's moon LV-426, and the cargo hidden inside the alien Engineers' spacecraft - intended to wipe out humanity - was the same bank of alien eggs discovered by Dallas, Lambert and Kane in Alien. Spaihts' draft followed two scientists - an archaeologist who had discovered human civilization seemed to advance inexplicably every 1,100 years and a geneticist who had discovered human dna changed on precisely the same schedule. Armed with a hypothesis, and funded by the enigmatic billionaire Peter Weyland, they set off to LV-426 to meet the aliens they suspect can be found there.

By contrast the shooting script (rewritten by Damon Lindelof of Lost and Tomorrowland fame) has two scientists head off to LV-223 (a weirdly similarly named but entirely different moon) purely as an act of faith. They only find evidence of alien dna among humans once they are in the thick of their adventure there. The idea of a trillion-dollar interstellar expedition being funded almost entirely on the religious whim of a Christian scientist is strikingly unbelievable.

Comparing the finished film to its original screenplay reveals a litany of poor story choices. The remnants of the original script remain, which creates a weirdly consistent story of scientists who agree to fly halfway across the galaxy without being told their mission, otherwise intelligent people getting lost in an alien labyrinth while having a map in their hands, a woman running around in protracted action sequences mere minutes after emergency Caesarian surgery and confused alien biologies that seem wilfully intent on not making any sense at all. Much of the plot only works by characters being actively stupid and panicky. That sort of behaviour actually works fine if those characters actually are a bit stupid and prone to panicking - it works perfectly well in Cloverfield, for example - but with a crew of intelligent, educated scientists and technicians it proves jarringly difficult to swallow.

It is all a great pity, because when this film works it does so wonderfully. The visual effects are stunning, and the various alien creatures - including an astonishing gargantuan face-hugger - are striking and dramatic. Scene by scene the film does its best to fool the audience: there's great material here, and a richness of ideas, and beautifully shot scenes of action and horror. In the end, however, it all masks and papers over a tone-deaf and woeful screenplay. A half-decent screenplay has been rewritten into the ground, and it ultimately ruins the movie. Prometheus is hardly the worst film ever made, but it is a very disappointing one. You can see the film that could have been made off somewhere in the distance, but you cannot reach it because somebody built this replacement in its way. It's a deep shame.

Thankfully the poor critical and audience response to Prometheus has not killed the Alien films entirely. Ridley Scott is returning for a third attempt later this year when he directs the Prometheus sequel Alien: Covenant. I hope it has a better script.