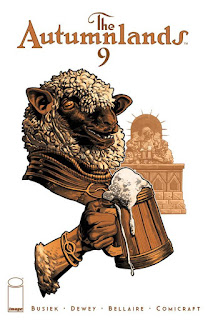 Learoyd and Dusty wake to find themselves rescued from the goats and brought to a peaceful village of sheep. There's a mysterious light in the mountain above, and a strange sickness affecting the village's oldest and youngest residents.

The Autumnlands is such a great fantasy comic. Truth be told I have no idea where the book is going: it started off as a story of rival magicians attempting to summon a mighty champion. Now it's a road trip between the last human in the world and an anthropomorphic dog in training to become a wizard. This book feels literary: it has a wonderful old-fashioned charm to it, one that's emphasised by Benjamin Dewey's exceptional artwork. Its aesthetic all looks more like an illustrated storybook than a comic, and that makes it feel unlike any other comic on the shelves at the moment.

There are plenty of mysteries running through the book. We still don't entirely know who Learoyd is, or why he keeps seeing an illusory golden woman. We have not reconnected with Dusty's masters from the floating city of magicians. Writer Kurt Busiek has hinted wonderfully at a much broader world with a long history, but so far we have only really seen hints of it. There is so much story promise here that I really hope The Autumnlands runs for a good long time. If you are a fantasy fan and a comics reader, you really need to be reading this book. (4/5)

Under the cut: reviews of Black Canary and The Massive: Ninth Wave.

Sandy Jarrell jumps in as artist as Black Canary kicks off its second story arc. Dinah is locked up in a cell by a martial artist cult, alongside fellow superhero Vixen, while her band receive instructions to come meet her in Europe. I like how effectively Brenden Fletcher has kept Dinah's bandmates in the story; it gives the comic a very distinctive character set. It's nice to see Vixen get a look-in, since she doesn't have a book of her own. Jarrell's guest artwork is strong and appealing, which helps to make up for Wu's absence this issue. (3/5)

It's a second issue of Gotham Academy's "Yearbook" storyline, which essentially means three more short strips giving independent writer-artists the chance to play around with the book's characters. It is a neat conceit, but it honestly worked fine as just the once-off issue - I'm not sure readers really needed several issues of this stuff. It's all pretty inconsequential as well, which doesn't make it feel like a very necessary comic. Much of it is very cute and rather sweet, but it's all throwaway. (3/5)

Brian Wood and Garry Brown present another done-in-one story of the environmental activist group Ninth Wave, set before the cataclysmic events of The Massive. In this case Callum Israel tries to lobby the American government while on an isolated Arctic Island his team work to save a colony of wolves from an oil drilling company. It's solidly made, but there's a spark missing from this current issue that was shining brightly in the last one. It may be that familiarity is breeding contempt: there's not a huge latitude between these first three issues, and the novelty - despite the high quality story and art - might be starting to rub off. (3/5)
Posted by Grant at 11:21 PM