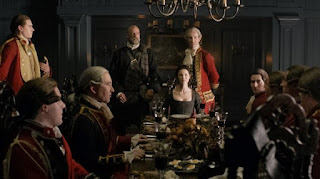 Claire (Catriona Balfe) and Dougal (Graham McTavish) are escorted by British troops to a nearby inn, where Claire can be assessed and introduced to the garrison's commanding general. Her visit takes a dangerous turn, however, when she comes face to face once again with Captain Jack Randall (Tobias Menzies), her 20th century husband's ancestor and the man who attempted to rape her when she arrived in the 1740s.

"The Garrison Commander" is an excellent episode of Outlander, combining great character work and dialogue with some unexpected plot developments, a harrowing flashback and a fleshing-out of a great new villain for television drama. Jack Randall was clearly going to be an ongoing antagonist from Claire from the moment she first encountered him. It is simply too perfect: a vile, spiteful and cruel monster, bearing the exact facial features of her husband Frank. Tobias Menzies does a startling job playing the two men in the same episode - Frank via a brief flashback and Jack throughout its second half - and he makes them strikingly different to each other.

This is not likely an episode enjoyed by too many English viewers. Outlander has given us several episodes to meet, get to know and ultimately admire the honourable people of the McKenzie clan. Now the series makes us watch as a dining room of English army officers cajole, insult and goad Dougal to the point of breaking out a fight. Of the entire English cast of the episode there seems only one decent man among them - the lieutenant who 'rescues' Claire from the McKenzies - and he is sent away fairly quickly. English contempt for the Scots is a matter of historical record, of course, and the English occupation of Scotland led to many atrocities, but there is something about the way the English are represented in this series that feels unpleasantly one-sided.

Nowhere is this more evident that with Jack Randall. He recounts his earlier whipping of Jamie (Sam Heughan) in extensive detail to Claire, and in doing so reveals himself as not simply cruel and sadistic but genuinely psychologically unhinged. The flashback depicting Jamie's torture is incredibly graphic - I personally did not have a problem with it, but I imagine many viewers were looking away or fast-forwarding through to the next scene. As mentioned above, Menzies does a fantastic job with the character, but there is the question of whether he is perhaps too cruel for the audience to enjoy. By the episode's climax he is gut-punching Claire and forcing a young soldier to repeatedly kick her when she falls down. At least it's not an attempt at a sexual assault this week, but it's still blunt violence against women and a little difficult to sit through. I am yet to decide how I feel about it: it's either brave and provocative or gratuitous and unpleasant. It just might be all of those things.

Dougal comes to Claire's rescue, but it is only a temporary reprieve: she is ordered to report to Fort William within a few days for further interrogation by Randall. There is only one way for Dougal to protect her now: make her a Scottish subject by marrying her to Jamie. It's a clever and unexpected twist, and revealed very well. The scene of Dougal and Claire by a mountain spring, him finally convinced that she is not a spy and her reeling from the suggestion she must marry Jamie, is well paced and beautifully performed. There is a visible understanding between them but also a palpable discomfort from Claire. It feels that while the dialogue seems to have forgotten Dougal drunkenly tried to assault Claire two episodes back, the characters themselves were not so quick to forget. It's strong, immensely watchable stuff.

We're now six episodes into Outlander, and I have enjoyed five of them. The quality ratio rises to 83 per cent. This remains a melodramatic, violent and often troubling series, but I cannot deny enjoying the viewing experience nonetheless.
Posted by Grant at 8:12 AM