Time Traveller: The Girl Who Leapt Through Time (2010) 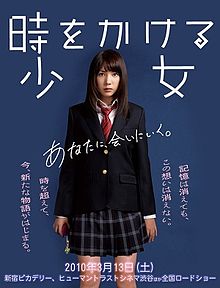 The Girl Who Leapt Through Time is a popular Japanese science fiction novel, originally published in 1967. It follows a high schooler named Kazuko Yoshiyama, who encounters and falls in love with a traveller from the 26th century and develops the ability to leap backwards through time. The novel has been adapted to film and television several times, beginning with a 1972 television drama and subsequently with feature films in 1983 and 1997 and most famously as a 2006 feature anime directed by Mamoru Hosoda.

Hosoda's film actually worked as a loose sequel to the novel, with actress Riisa Naka voicing Kazuko's niece on a time travelling adventure of her own. In 2010 director Masaaki Taniguchi attempted something similar, directing Time Traveller: The Girl Who Leapt Through Time. It is another sequel to the novel, and this time much more directly, as Kazuko's daughter Akari (Riisa Naka again) travels from 2010 to 1974 in an attempt to pass on a message from her hospitalised mother to the mysterious time traveller she romanced back as a teenager.

Time Traveller offers a gentle sort of time travel. There is no urgent need to change the past in order to save the future. There is no large-scale crisis about changing history or breaking timelines. It is ultimately a fair simple story. Akari aims to head back to February 1972, but accidentally travels to 1974 instead. It is too late to meet the mysterious young man that her mother continues to love, and in struggling to track him down Akari instead meets her own teenage mother, her future absentee father, and a young aspiring filmmaker named Ryota (Akiyoshi Nakao) - with whom she forms a romantic relationship of her own. 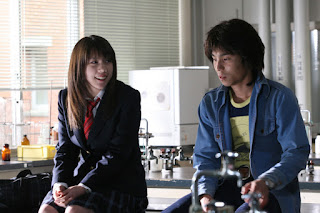 It is also an odd sort of science fiction film, partly because it is much more interested in being a teen melodrama than in actually exploring any speculative ideas. It also treats time travel with a fairly fantasy-oriented perspective: one makes the journey by drinking a potion and wishing to travel to a time and place, and then drinks a second potion and makes a wish to return. In between Akari gets to run through an utterly bonkers time tunnel sequence that looks like a mid-1990s platforming videogame.

The film does a decent job of creating 1974 Japan, in terms of costume and hair-styling as well as some inventive set design. It is a neat touch that Ryota - the first person that Akari meets in the past - is a wannabe filmmaker in the middle of shooting a science fiction on 8mm. It feels wonderfully appropriate to the period - and his apartment is decorated with numerous posters of period-appropriate tokusatsu (special effects) and kaiju (monster) movies.

Riisa Naka makes for a wonderfully appealing protagonists. She plays Akari's emotions broadly and honestly. She is very expressive. She also has a real gift for comic timing, and several opportunities to showcase her comedy skills. Akiyoshi Nakao has a much less varied role to play as Ryota, and certainly less opportunities to be funny, but he remains a solid and believable co-star. Other actors in the film are all solid, but do not particularly stand-out.

It is impressive to see how the film refuses to take easy, entirely happy choices with its story. To elaborate on its storyline would be to give away its ending, but suffice to say it manages to balance both happy and sad elements together and create something a little more nuanced and satisfying than I originally expected to see. It is the sort of film that creeps up on you a little; it begins in a manner that suggests a certain kind of story and tone, and then surprises a little with the choices it makes along the way. Considered all in all, Time Traveller is a very sweet and satisfying melodrama. It has less of an eye on its science fiction plot and more on the people within it.
Posted by Grant at 9:37 AM