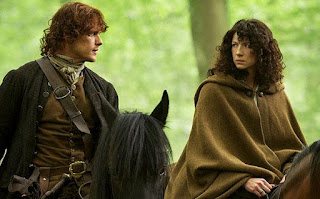 In 1743 Claire Randall (Catriona Balfe) continues her way on the road with her new husband Jamie (Sam Heughan) and members of the McKenzie clan. In 1945 her old husband Frank (Tobias Menzies) continues to frantically search for her, despite everyone else - including the Inverness police - having given up on finding her.

The first season of Outlander was split in two on its original broadcast, with this episode first airing in September 2014 and the subsequent episode airing in April 2015. As a result this episode effectively acts as a season finale in all but name. It is a striking episode that is in turn moving, thrilling and terrifying. The spectre of rape, which has loomed uncomfortably over the series since the first episode, returns to torment Claire once again not once but twice in the same hour. That does damage the episode somewhat. I am not sure what motivates the use of sexual assault as a generator of drama in contemporary American television, but I am reasonably sure I don't like it. It is somewhat like conducting surgery with a shotgun when a scalpel would do.

Rape is a horrible thing. It traumatises. It causes horrifying and permanent damage to its victims. It is utterly abhorrent. One thing it is not is entertainment. Certainly it has a place in storytelling, since stories express or reference facets of real life and sadly rape remains a part of human society. That place, however, is one that needs to be used with the upmost responsibility. As viewers we are not confronted by depictions of murder because for the majority of us murder is not something we have personally experienced. Many of us have experienced a sexual assault. We most certainly are confronted by it. If it is used gratuitously, or for cheaply gained tension or horror, or - heaven forbid - vicarious titillation, I think it represents a betrayal of the viewership. A drama series like The Shield included a rape once that dominated a story arc for a whole season. It affected its victim for years after the fact. A series like Outlander seems to use it as a quick way to make the audience fear for Claire's safety. A series like Game of Thrones sometimes seems to use rape as punctuation.

The appalling thing with this episode is that they play the card twice. Jamie and Claire are in the middle of a secret quickie on the side of hill when they're ambushed by Redcoats, one of whom immediately begins to rape Claire. She kills him, having been instructed in the use of a sgain dubh (a small Scottish dagger) earlier in the episode. About 20 minutes later she is captured by Redcoats again, and this time taken for a third encounter with Captain Jack Randall (also Tobias Menzies). The episode hits a cliffhanger with Randall about to rape her over a table while Jamie stands wedged in the window about to shoot Randall in the face with a musket.

As an audience we did not need either scene to demonstrate that Claire was in danger, or to fear for her safety. It's pure, tawdry shock tactics, the kind that are well beneath the usual standards of showrunner Ronald D. Moore. I have not read the Diana Gabaldon novels upon which this series is based, so cannot comment on whether she relies on rape as much in her books, but even assuming she does there was no requirement for the television series to follow suit. Both moments here tarnish the rest of the episode, and that's a deep pity because the rest of the episode is exceptional.

Apart from some brief flashbacks we have not seen Frank Randall, Claire's loving husband of 1945, since the series began. We were sharply reminded of him at the end of the previous episode, as a visibly troubled Claire looked down at her two wedding rings - one on each hand. "Both Sides Now" provides an enormous surprise from the get-go by returning to 1945 and showing Frank's progression since Claire vanished. It boasts a great performance by Tobias Menzies, who makes a striking impression in his dual roles as Frank and Jack. It's been six weeks since Claire vanished. Everybody is telling him she clearly ran away with another man. He is at his wit's end, and it seems he is also on the verge of giving up on ever finding her again.

The episodes cuts back and forth masterfully between Frank and Claire, and reaches a pitch-perfect climax where the two are almost reunited at the Craigh na Dun standing stones. I hope this is not the last we see of Frank. Somehow I don't think it will be.

Back in 1743 events proceed in a mostly entertaining fashion. The men of the McKenzie clan - Angus, Rupert, Ned and the like - are all very engaging and funny, and the episode does a good job of giving each character their moments to shine and take centre stage. Dougal (Graham McTavish) remains an oddly threatening yet fascinating character. He is so untrustworthy in regards to Claire, yet it's so difficult to take your eyes off him. It is a great performance from McTavish.

When Claire is recaptured and sent back to Captain Randall it is a wonderfully written and performed scene, with huge amounts of implied threat to Claire, right up to the point when he tries to rape her. It is such a letdown. Such a good episode. Such a simple way to compromise it.

I am unhappy with this series' continued reliance on the threat of sexual assault, and it's fortunate that in this case the rest of the episode is strong enough to counter-act the damage it does. It leaves this first run of eight weeks with seven good episodes and only one out-and-out bad one. That leaves the first season with a quality ratio of 88 per cent - but oh my the rape. Moore and his writing team really need to reconsider that angle.
Posted by Grant at 7:17 PM