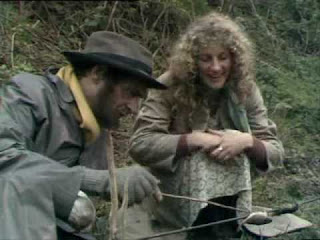 It's 4 June 1975, and time for another episode of Survivors.

Greg (Ian McCullough), Jenny (Lucy Fleming) and the kids find themselves trapped in a van surrounded by a pack of hungry dogs. Meanwhile Abby (Carolyn Seymour) meets two more survivors of the plague - and has another encounter with the shift Welshman Tom Price (Talfryn Thomas).

Then the money ran out. I am assuming that is what happened at any rate. Survivors had until this point balanced its shoot between studio recordings on videotape and location shoots using 16mm film. Now the exterior scenes are shot using outside broadcast video, which on the one hand gives the episode a more consistent visual texture but on the other makes the whole enterprise look an awful lot cheaper. The lower budget affects the episode in other ways too. The sound quality is variable. The performances feel rushed and under-rehearsed. A pack of wild dogs, which should in theory be a terrifying threat to the characters, is represented by a small collection of remarkably sedate and friendly group of pets.

The episode pulls its punches as well. One of the things that really impressed me with the earlier Survivors episode is just how relentlessly bleak it all was. Seemingly friendly people turned out to be self-interested criminals. Happy situations rapidly turned bad. People died. A fair amount of time is spend regarding the wild dogs in "Starvation", but nobody gets badly bitten. A woman is threatened for a brief time but completely recovers. I cannot help but imagine that this episode produced one or two weeks earlier would have ended with a body count.

Without that sort of violent tension there is precious little here to hold the viewer's interest. The dogs do eventually go away, and that leaves Greg and Lucy to explore and settle into a large country manor house. They meet Barney (John Hallett), a mentally challenged man who has been hiding there from the dogs. Later on they reunite with Abby, who brings with her fellow survivors Wendy (Julie Neubert) and Emma (Hana Maria Pravda). It all becomes a rather cosy little soap opera by the end. I think this is the first completely happy episode the series has had, and as a result it feels tonally wrong.

Their little community now also includes Tom Price, the shifty Welsh layabout who had previous appeared in the series' first three episodes. He remains a near-unwatchable character: based on repellent cultural stereotypes, he mutters and sneers his way across the screen, adding nothing to the series but the ability to make the viewer cringe. I feel sorry for Talfryn Thomas, whose career was largely pigeon-holed by Welsh stereotypes like this. I also feel sorry for the viewers, who have to sit through his awkward and embarrassing performance. Everybody deserved better.

"Starvation" - titled because the characters are very briefly running short on food - is a flat-out awful hour of television. It is weakly conceived, poorly written and tediously produced. It actively squanders the series' true potential. I really hope it is a momentary failure and not a sign of things to come. We're now seven episodes into the season and five have been good. It's a bit of a worry that the two bad episodes have been the last two. The quality ratio slips to 71 per cent.
Posted by Grant at 9:31 AM