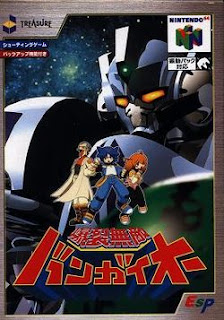 Not all of the best Nintendo 64 games made it outside of Japan. Occasionally a great game barely manages to make it in Japan itself. Take Bangaioh, sometimes titled Bangai-O. It was a fast-paced, quite extraordinarily chaotic shooter developed by Treasure and distributed on a limited run of just 10,000 copies. It is one of the trickiest Nintendo 64 titles to track down. I have never seen a physical copy in the wild, and the only legitimate version I have owned and played is the subsequent - and much more widely distributed - Sega Dreamcast port.

There is something really satisfying about scrolling shoot-em-ups. They can be maddeningly difficult, and certainly I only tend to play them if I can somehow give myself an infinite number of lives, but the experience of clearing what looked like an impassible screen full of flying little spaceships or monsters is a marvellous one. Japan in particular went nuts for the genre, and to an extent still is with a dedicated niche fanbase lapping every small-scale release as it comes out. I expect they adored Bangaioh, since it is a particularly frantic and chaotic example of the genre.

Bangaioh appeals to me in particular on the Nintendo 64 because that was a console that by-and-large abandoned the 2D format. 3D was the thing, spearheaded by Super Mario 64, and any game that did not ascribe to some kind of 3D set-up - even if it was just the graphics - ran the risk of dying a quick death on store shelves. Bangaioh feels like a very strong statement: it embraces an older form of videogame and is not ashamed to wallow in the format, no matter how unfashionable at the time.

Is it a cheat to include a game I have never actually played in this countdown? Yes and no. No because, well, it is my list and my rules. No because it is the existence of the game that is of primary appeal to me. It is a sign that, no matter how aggressively the Nintendo 64 pushed towards the future, there was still room for an older and more elegant style of videogame. It is reassuring to know that it was there, and I can dream that one day I might stumble upon one of those 10,000 copies and try the game out for myself.
Posted by Grant at 3:35 PM