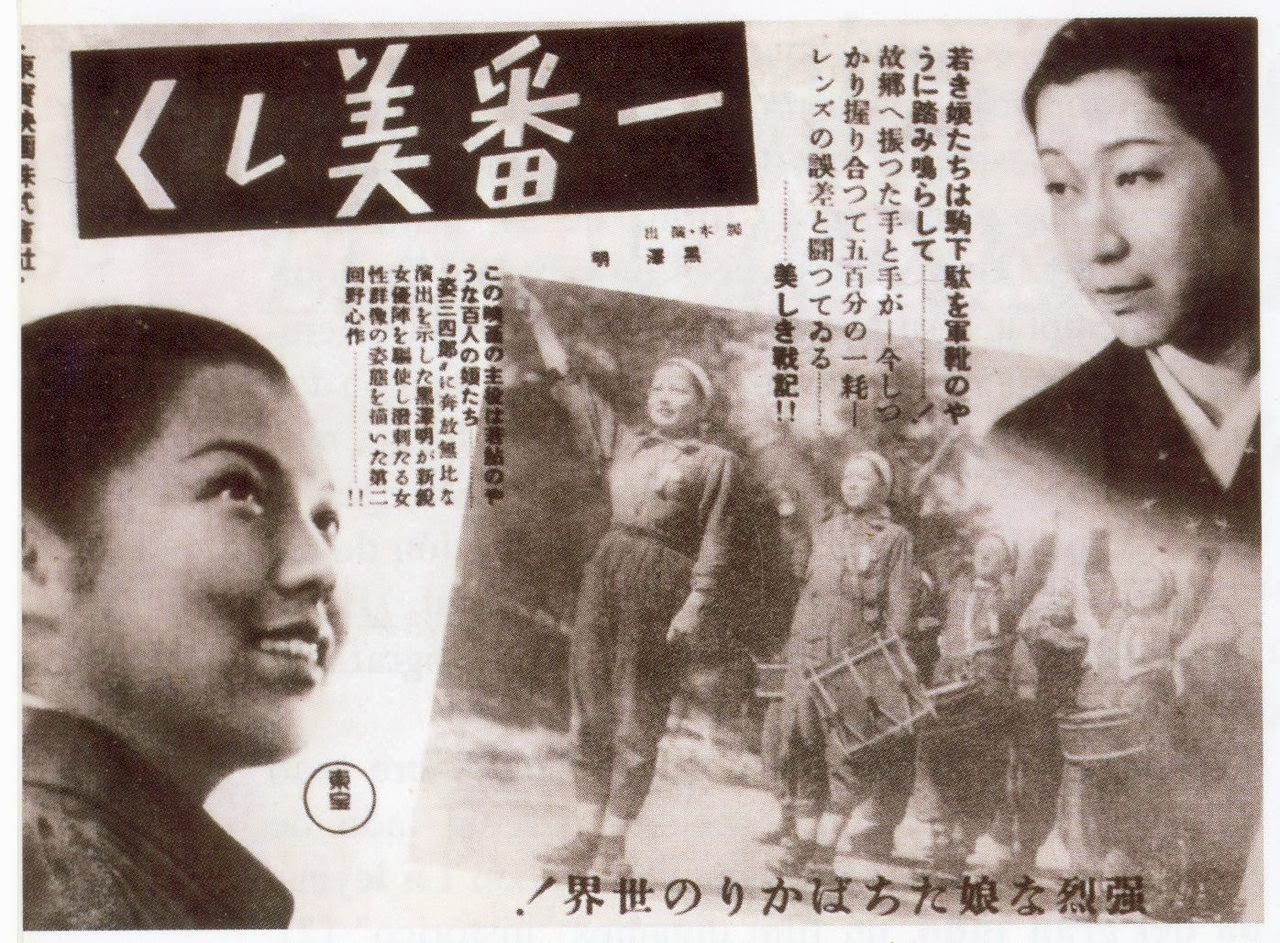 A few weeks ago I watched and reviewed Sanshiro Sugata, the debut film from legendary Japanese director Akira Kurosawa. Watching it was part of a new mid-term plan: to actually watch and review all of Kurosawa's feature films in order, and get a proper understanding of his style and his particular talent for filmmaking and visual storytelling. Sooner or later I'll get to his most famous works like Seven Samurai and Rashomon, but here we are with his second film: the 1944 drama The Most Beautiful.

Of course in 1944 Japan was fighting a war in the Pacific against the USA, Australia and other allied nations. As a result there was a strong demand from the government for propaganda pictures: films that would keep the general population hopeful and driven towards the war effort. Unlike other major directors like Yasujiro Ozu, Akira Kurosawa was not enlisted in the Imperial Army. Instead he was required to fight the war from Toho Studios. Initial plans were for Kurosawa to direct an action film about Japanese fighter pilots, but as the war developed and Japan's situation became grim he was instead told to write and direct this: a drama about a dormitory of young women who manufacture precision optics for the armed forces.

Watching a propaganda film is always a fairly odd experience, but it's doubly strange when you watch characters talk about fighting the bad guys and smashing the enemy and have that sudden realisation that it's you and your country the characters are talking about. The film begins with a bold and aggressive caption: "ATTACK AND DESTROY THE ENEMY". That's one of the benefits of the propaganda picture, there's no real risk of missing the film's intention or purpose.

The film is based around a group of young women who live together in a dormitory while working at a nearby optics manufacturer. It is their job to construct, polish and test lenses for artillery and fighter planes. When the monthly quota is increased 100 per cent for the male employees, but only 50 per cent for the female employees, the girls band together and demand to be given a quota of at least two-thirds. The film then shows their collective efforts to overcome distraction, in-fighting and personal crises to achieve their quota in the required time.

It's hardly a subtle exercise, and indeed it tends to lead to quite a lot of intentional hilarity. In one sequence one of the girls, who has slipped off a roof and badly damaged her spine, promises to concentrate on nothing but learning to walk again so that she can return to the factory and help achieve the quota. In another sequence a girl desperately tries to hide her growing illness and frailty, because her own life is less important that meeting the quota. On it goes, with the girls - they really are an amorphous mass rather than particularly individual characters - doing their best, and a group of kindly adults watching over them with patience and upbeat encouragement. This includes regular Kurosawa collaborator Takashi Shimura playing the factory's gruffly spoken chief.

While the overt earnest quality of the film lends itself to amusement, the underlying reality of the film is rather depressing. It is, for all intents and purposes, an advertisement for child labour for the purposes of maintaining an over-stretched war machine that had invaded much of Asia and which violently threatened the entire Asia-Pacific region. Japan's nationalistic government was a deeply unpleasant one, and while Kurosawa was by all means no fan of their regime it is still a fairly appalling attempt at currying public support of their actions and policies.

Technically it is shot extremely well, with Kurosawa making great use of rapid cuts and close-ups in key sequences of the film. It is also a much cleaner viewing experience than his first film, in terms of both the visual language used and the story that is told. Sadly the limited storyline and characterisation, paired with the relatively unpleasant government being promoted, makes The Most Beautiful a slightly trying experience. It's less of a watchable film, and more of an intriguing historical curiosity: worth watching to see how its director's skills developed, but not otherwise worth recommending.

One point of trivia: to better generate at atmosphere of camaraderie among his female cast, Kurosawa had them all camp in the actual dormitories in which the film was set. Conditions were not ideal, and ultimately the cast nominated one actress to challenge the director and demand he be more considerate in forming his working environment. That was Yoko Yaguchi, who plays the selfless and diligent Watanabe. She and Kurosawa married the following year, and remained so until her death 40 years later.