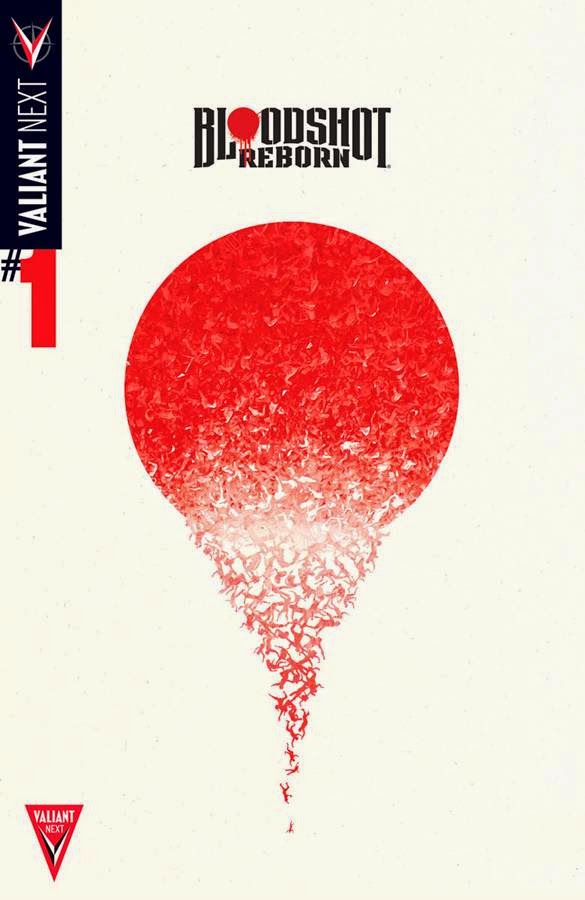 For the last few years Valiant has been a widely ignored creative force in American superhero comics. When they launched, it was with subtle re-imaginings of old characters from the last Valiant Entertainment: Archer and Armstrong, Quantum and Woody, Ninjak, X-O Manowar, and so on. These weren't particularly famous characters compared to Marvel and DC, but in many respects that helped the company. They were free to bring them back in genuinely fresh and interesting ways, and for a couple of years now Valiant has been publishing some brilliant inter-connected superhero books. It's an expanded universe that's still small enough that your average comic book reader could probably afford to buy all of their titles each month.

This month sees the next stage for the popular character Bloodshot commence, with Jeff Lemire and Mico Suavan's Bloodshot Reborn.

Bloodshot Reborn features Ray Garrison. He used be Bloodshot, a super-powered government assassin. Now he's an ordinary man, working as a motel handyman during the day and lying awake at night - tormented by the memory of all the people he has killed. When a random killing spree is undertaken by a stranger wearing Bloodshot make-up, Ray finds himself irresistibly drawn back towards the life he had willingly left behind.

The beauty of this first issue is that it clearly functions as an effective sequel to the monthly Bloodshot comic, yet it also works exceptionally well as a starting point for new readers. That's something Valiant really get that Marvel and DC often don't: every comic book is a first issue for somebody. Obviously as issue #1 this is a strong entry point, but to be honest I've found every Valiant comic I've read this month to be just as easy to get into.

Jeff Lemire's script is great: it re-introduces the character and rapidly fills the reader in all of the required back story. Mico Suavan's artwork is fantastic: it's richly detailed, and atmospheric. If you haven't sampled Valiant's stuff before, this seems as good a place as any to start. If you enjoy well-told, original superhero comics, they're consistently doing some of the best in the business. (5/5)

Under the cut: reviews of The Fly: Outbreak, Star Trek and Unity.

I was impressed enough with the first issue of this miniseries to come back for the second: Martin, the son of dead scientist Seth Brundle, has been struggling to find a cure for the fly/human hybrid condition that killed his father and transformed his boss. Now he's trapped inside a scientific facility with that mutated boss, and fighting to survive. I'm a real sucker for this kind of semi-realistic painterly artwork. Dark Horse used it a lot on their best Alien tie-ins, and it's well used here. The story continues to be rock-solid, and movie tie-in aside it's presenting some great comic book horror: this has been a real surprise. (4/5)

Trapped in the Andromeda Galaxy, the USS Enterprise is towed to a remote trading centre in order to find the dilithium its crew desperately needs. To its credit, this story feels an awful lot like an authentic Star Trek adventure. The fact that its cast are the new movie versions of Kirk, Spock, et al, does take a little getting used to though, and I find Shasteen's artwork to be a little too photo-referenced for my liking: it gives the book a sort of pasted-together look that lacks a lot of energy. Still, if you're waiting between movies and want a fresh hit of Enterprise goodness, this certainly hits all the right notes. (3/5)

Unity follows a team of superheroes including characters like Livewire, Ninjak and the Eternal Warrior. I have to be honest: while Valiant's stuff has really grabbed my attention this month, I think this book might be the weak link. It simply doesn't feel like it has any real hook with which to grab my attention, Matt Kindt's writing is certainly solid, but it's also unexceptional. Pere Perez's artwork is somewhat similar: clearly made by a solid talent, but without any distinctive style that attracts my eye. This is the first issue I have read of this book, and it feels somewhat like downtime after a major storyline. Regular readers might have a better time than I had. (2/5)
Posted by Grant at 6:05 PM