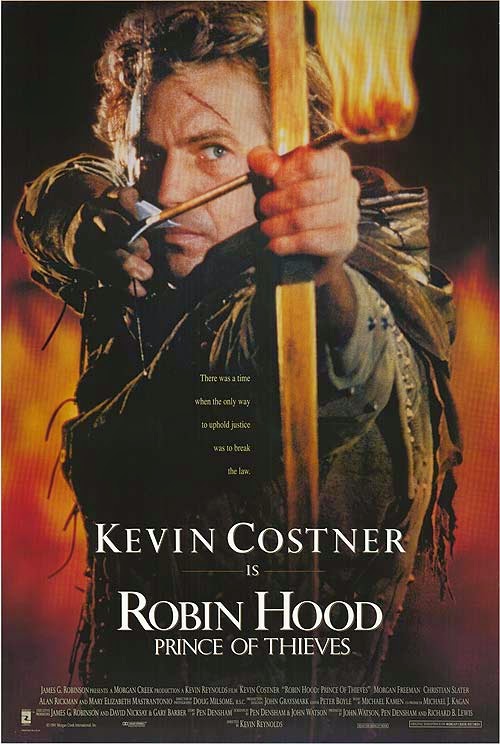 I am a sucker for a good Robin Hood story. There's something about the narrative, the setting and the characters that simply grabs my attention and warms my heart. For me the gold standard remains Richard Carpenter's ITV television series Robin of Sherwood, closely followed by Michael Curtiz and William Keighley's 1938 film The Adventures of Robin Hood. That said, I still have a lot of affection for Kevin Reynold's 1991 film Robin Hood: Prince of Thieves. It's a film that continues to get a lot of mild ricidule, but despite several faults it remains a well-produced and entertaining movie.

Robin of Loxley (Kevin Costner) returns to England from the Crusades accompanied by Azeem (Morgan Freeman), a Moor whose life he saved while in captivity. Upon his arrival Robin learns that the Sheriff of Nottingham (Alan Rickman) has had his father killed and his family lands confiscated. Soon Robin leads a growing band of thieves in an attempt to unseat the Sheriff and prevent his plot to overthrow King Richard I and rule the whole of England.

Obviously I've watched this film quite a few times since its release, but what struck me the most about the most recent viewing was just how much of the film is shot using handheld cameras. There's a general expectation, particularly in the 1990s, that a big budget Hollywood production would make extensive use of dollies, cranes and Steadicam units. That simply isn't the case here: there's a lot of deliberately rough, slightly shaky camera work going on. It's nothing so much that it prefigures the 'shakycam' excesses of Universal's Bourne movies, but it is still something quite distinct from the other films around it.

Part of the film's appeal comes from its cast. Much of the praise has typically been reserved for Alan Rickman's Sheriff of Nottingham, a deliberately over-the-top performance that's certainly very entertaining, and which has combined with Rickman's performance in Die Hard to make him one of this generation's most popular on-screen villains. This is despite his only really playing the villain twice in a career spanning several decades. I have also always loved Nick Brimble and Soo Druet as Little John and his wife Fanny: they both get distinctive personalities, perform their roles with a lot of warmth and humour and individually get a lot of agency. Other actors don't really perform particularly distinctive characters, but get by amiably by trading on their own screen presence: Morgan Freeman, Christian Slater, and Michael Wincott all seem to fall pretty quickly into this category: they're all enjoyable to watch here, but you'd never call it their best work.

As Robin Hood himself, Kevin Costner drew considerable ire from critics and audience. I think they're altogether too harsh, but then I'm a pretty forgiving fan of the actor. It's true that he performs the role with his own American accent (Kevin Reynold's choice, by the way, not Costner's), but he's likeable, energetic and is clearly having a lot of fun with the part.

For me, however, the real star of the film is musical composer Michael Kamen. Kamen had a rich, pretty varied career, whether it was composing music for feature films or orchestrating tracks for Pink Floyd, or master-minded mash-up concert performances between orchestras and Metallica. He composed a lot of exceptional scores for films, including Highlander, X-Men and Die Hard. For me, Prince of Thieves was always his best work. Even the Bryan Adams theme song, which Kamen co-composed and which got horribly over-played on the radio, suits the film and caps it off nicely.

Robin Hood: Prince of Thieves is a breezy, enjoyable adventure film. It's got plenty of problems (a little too grim in places, a few egregiously obvious and out-of-place backgrounds, plagiarism issues with the character of Azeem) but overall it does what it says on the tin and remains a nicely pleasant two hour romp. It's comfort food for the eyes and ears: a film that, year in and year out, I keep watching because it's quite simply pleasant to watch.
Posted by Grant at 6:50 PM