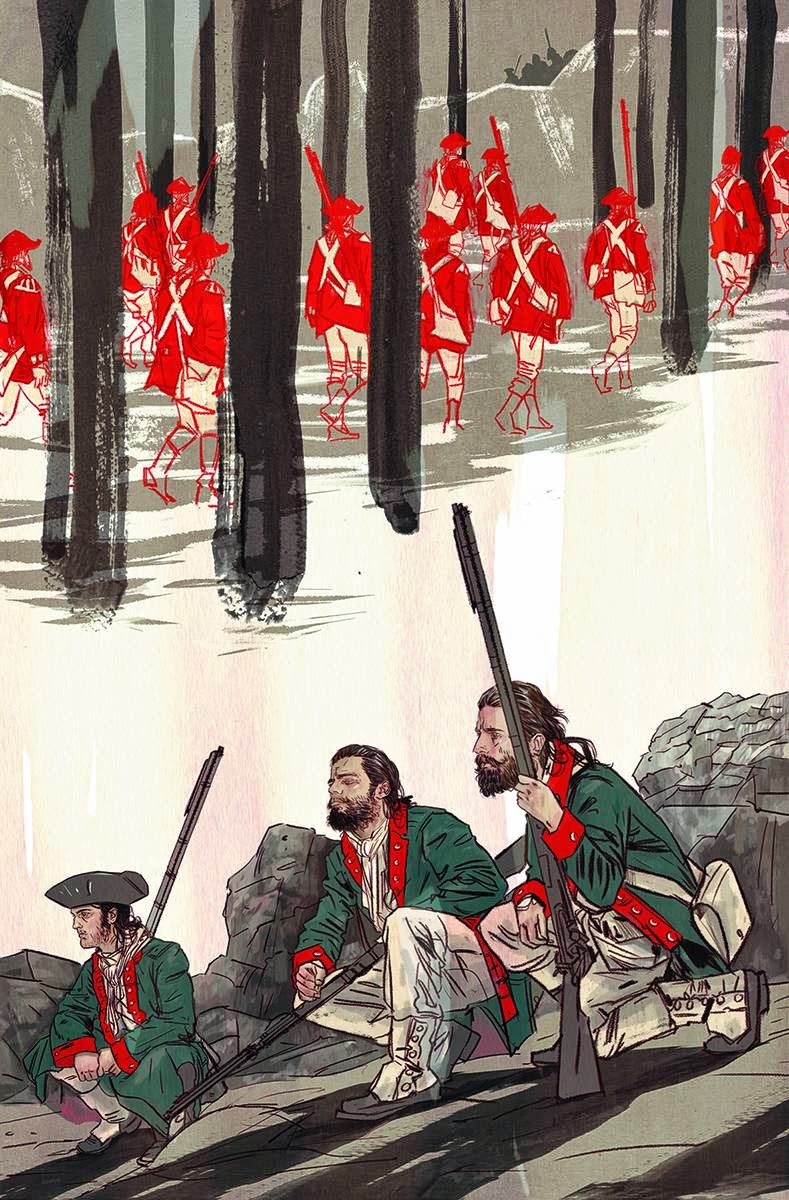 Brian Wood is a writer responsible for a number of excellent long-form series. Books like The Massive, Northlanders and DMZ have presented readers with expansive, long-running stories with beginnings, middles and ends. They're generally enormously satisfying works, and this week he's kicked off his latest with Rebels #1.

The book is set in 1775, and follows a young married couple - Seth and Mercy Abbott - on the eve of the American Revolution. It's a setting ripe for drama and intrigue, and certainly Wood dives in head-first with this exceptional first issue. It is realistic, impeccably researched, and beautifully written. It's illustrated with about as much accuracy and skill by Andrea Mutti, supported by Jordie Bellaire's typically wonderful colours.

We get a lot of superhero comics, and recently plenty of science fiction books and a few fantasy epics. We very rarely get historical fiction, which is a shame, because it suits the comic book medium so well. This book looks set to be absolutely outstanding: my advice is to get in from the ground floor. (5/5)

Darth Vader is on his way to the droid factories of Geonosis, with an archaeologist and a pair of homicidal assassin droids in tow. Triple-Zero is the best new character of this series, getting the laugh-out-loud lines and acting as a wonderful contrast/mirror version of C3PO. This issue also blends elements of both the original and prequels trilogies, which was something I always appreciated back when Dark Horse were publishing the Star Wars comics. It's also great to see Gillen expand the book's supporting cast: Vader is a phenomenal character, but he works because he does so little. There was always a risk this book would over-use him, and it's good to see other interesting characters take the spotlight so as not to overuse him. (4/5)

IDW really do pick some odd properties to expand into comic books. To me Edward Scissorhands always seemed like a perfectly self-contained film. I didn't need to see more stories about what happened next. That said, this ongoing comic book is quite a surprise. It captures a lot of the odd, hopeful tone of Tim Burton's film but adds to it an extra level of teen drama that seems to stretch a little beyond the original movie. Drew Rausch's cartoonish artwork really suits the tone of what Kate Leth is writing here, and Rikki Simons' colours are simply wonderful. (4/5)

Imagine... reading... a really slow... comic series... that drags... and drags... until... finally... it runs into... a Marvel-wide event... and suddenly everything has to be wrappeduprightnowreallyfast. That's pretty much my experience of Miles Morales #12. When this book was relaunched a year ago it was on the back of another line-wide event, and since then it's been as if Brian Michael Bendis has been staggering onwards month to month without any solid gameplan or narrative direction. Now, to add insult to injury, it's all discarded at the last minute. This issue doesn't even end, it just bluntly stops with a deus ex machina cliffhanger to drag the reader into Secret Wars. I'm done. I love the character, but not so much that I need to throw away US$3.99 a month in the hope that things might get better the next time around. Ultimate Spider-Man was a great comic. It's run, in one volume or another, with the same writer for 15 years. We're well overdue for someone else to have a go. (2/5)

It seems odd, after such a protracted delay, to get two issues of Rat Queens in such rapid succession. It's a great issue as well: Sejic has more than acclimatised to the characters and setting, and Weibe's script combines the book's typical scabrous humour with moments of genuine heart and humanity. This remains an immensely potty-mouthed book (my favourite word this issue was 'snuggletits') but also a remarkably well characterised one. Now that the book has wrapped up its difficult second arc I'm really keen to see what its creative team comes up with in their first full storyline together. (4/5)

Marko's overdose is the perfect opportunity for Vaughn and Staples to indulge in a little character development, as he hallucinates and flashes back all the way through his life - his marriage, his war experience, and his childhood. Saga's patented gift for generating great new characters continues with Ghus, a sort of tiny walrus person who's a lot more violent and edgy than he would initially appear. This issue actually benefits quite a lot from its focus on Marko. Previous issues in this arc have lost a lot of momentum by splitting the storyline three ways. At least here we get a solid chuck of story development all in one hit. (4/5)
Posted by Grant at 11:36 AM