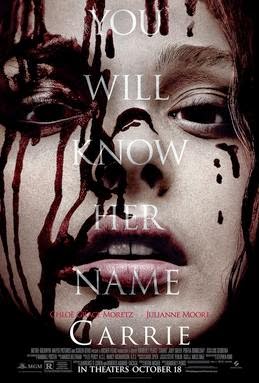 Carrie White (Chloe Grace-Moretz) is a shy, awkward girl. At home she is terrorised by her obsessively religious mother (Julianne Moore). At school she is bullied by her classmates. She is also beginning to exhibit mysterious telekinetic powers that only seem to be growing more powerful each day. Put all three elements together, and it's a pretty clear recipe for disaster.

Carrie, written by Stephen King and first published in 1974, sold more than a million copies on its initial release. This success led United Artists to produce a feature film adaptation in 1976. This film was directed by Brian De Palma and starred Sissy Spacek and John Travolta. It too was a solid commercial success, and remained an iconic and popular horror movie for decades since its release. As a successful MGM/UA production, of course, it eventually became ripe for a remake. Carrie returned to the screens in October 2013 with Chloe Grace-Moretz (Kick Ass) starring and Kimberley Peirce (Boys Don't Cry) directing.

A few months after this Carrie remake was released, MGM released a remake of Paul Verhoeven's Robocop. I saw that film in the cinema, and have only caught up with Carrie now: one film reminded me an awful lot of the other.

Here's the thing: they're both generally effective films. They're both shot with a solid eye, boast impressive production values and have reasonable strong casts. They're also almost entirely redundant. Motion pictures are almost always produced with one eye on art and the other on commerce. That's not a problem, generally speaking, just a reflection of their status as commercial art. In the case of these MGM remakes, however - and there's a Poltergeist remake fast approaching - the commercial concerns appear to vastly outweigh the artistic ones. There's not really an reason for these films to exist beyond the simple drive to make MGM money. Audiences know the titles of these films already, and to a large extent they know what to expect. As a result MGM can more easily guarantee a moderate profit than they could with an entirely new and untested intellectual property.

That in mind, there's actually an awful lot that works in this film. Grace-Moretz is excellent as Carrie, giving a performance that's a bit warmer and more engaging than Spacek's version. Julianne Moore plays the mother very well, but to be honest this whole film feels a bit like a walk in the park for her: a chance to make some cash in between other, more challenging, projects. Judy Greer is unexpectedly good as Miss Desjardin, the gym teacher who does her best to protect and support Carrie at school.

Kimberley Peirce does a good job of directing the film as well. Her version feels a lot more earnest and sympathetic than De Palma's bleaker, more cynical adaptation. It's been a while since I last saw the De Palma version, but it felt as if this remake allowed the film more room to give Carrie some hope and agency as the story progressed. That hope is, of course, short-lived, because I can't imagine anyone watching the film wasn't already aware of the story's bloody, frightening climax.

That climax mostly works very well. Peirce has the benefit of modern filmmaking technology, and exploits it to make a much longer, more elaborate sequence. It arguably goes on a bit too long for its own good, but remains mostly very satisfying. The film's opening scene, in which Moore's character gives birth to Carrie, is even better. It's one of the most effective scenes of horror I have seen in a while.

Sadly, despite the talent involved in putting this film together, it still all winds up feeling remarkably redundant. We already had a Carrie movie. If you included the 2002 TV version, we already had two. While Peirce brings a lot to the film, she's working against the gravity of the original film and - in the end - simply doesn't have enough new material to escape it. This is a good film, but also a pointless one.
Posted by Grant at 10:07 AM