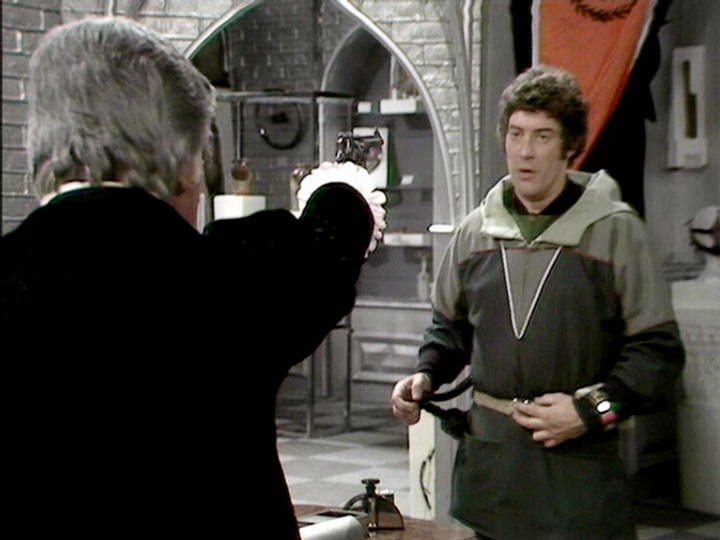 Blake (Gareth Thomas) and Cally (Jan Chappell) attempt to infiltrate a secure facility to rescue Sarkoff, the exiled former President of Lindor - an independent colony world now in danger of falling into Federation control. Meanwhile a passenger ship in orbit has put out a distress call to the Liberator - but is everything truly as it seems?

Like "Breakdown", "Bounty" is a curious episode that combines two narratives without every really pulling them together or relating them in any functional way. On the one hand you have Blake's attempt to convince a forlorn history-obsessed politician to return to his home planet. On the other you have a group of bounty hunters invading the Liberator and capturing the crew. Either could have formed a full episode in its own right, but instead they're both oddly truncated and awkwardly jammed together.

Let's look at the Sarkoff elements first. He's played rather well by T.P. McKenna with the right blend of pomposity and low self-esteem. He's fascinated by 20th century artefacts, which feels rather trite and forced at first - he even gets driven around in a 1920s automobile - but eventually leads to some great writing. The very concept of an old, worn-out politician living the rest of his life surrounded by antiques is thematically very strong, and Blake's breaking of his beloved bakelite records to force him to leave is remarkably powerful to watch.

The setting for this episode - a building in a field purpose-built to look like a 20th century building - is an obvious and slightly painful result of the series' low budget. By this stage in the season the money was visibly running a bit thin: aside from one set thrown together for Sarkoff's private museum, and a brief location shoot at Waterloo Tower in Kent, the entire episode takes place inside the Liberator.

The Liberator sequences feel really odd: it's too much plot to throw into an episode when it's already halfway through, and as a result a lot of interesting stuff is hand-waved away. We learn very quickly that a bounty hunter named Tarvin has managed to take over the ship and lock Blake's crew away, and that Jenna has apparently switched sides and joined Tarvin - a former lover. We don't get to see it though. Any potential drama in Jenna betraying her friends is eliminated, since it is immediately revealed that it was a ruse so that she could rescue the others and gain the upper hand. Marc Zuber does a pretty good job as Tarvin - it's just a little weird that he and his crew are all dressed as weird blue space Arabs.

While this episode shares very similar faults to "Breakdown", the two main portions are much more interesting. As a result I'm inclined to give this episode the thumbs-up. It has a lot of problems, but there's a lot of gold nestled among the fields. This leaves Season 1 with seven good episodes out of 11, and a quality ratio of 64 per cent.
Posted by Grant at 8:02 PM