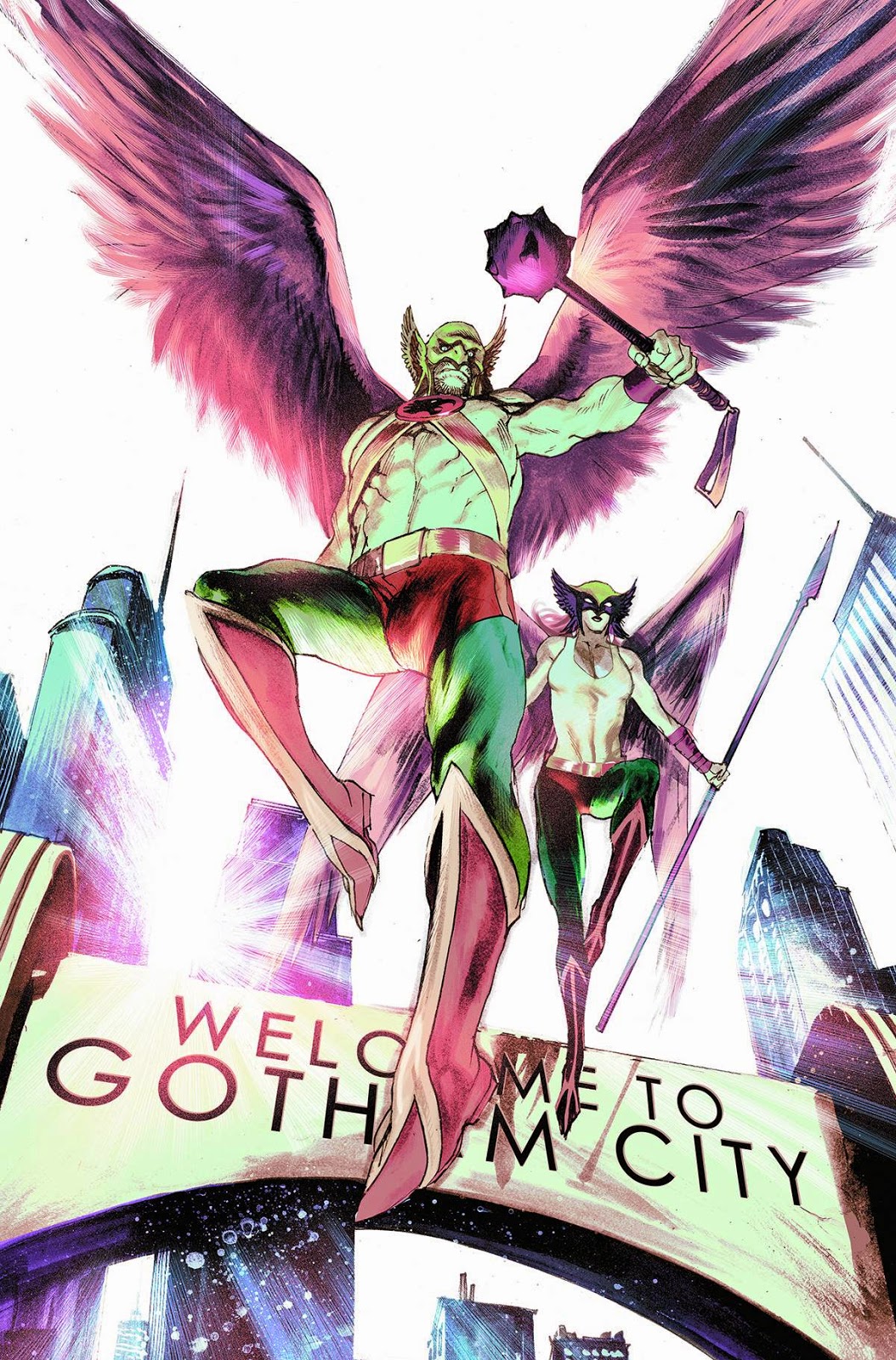 Thus far I have been entirely avoiding Convergence, DC Comics' massive two-month event series in which all the various alternative and historical renditions of the DC Universe undergo a highly self-indulgent mash-up. A weekly core series makes up the bulk of the event - but bizarrely seems focused on setting up their forthcoming monthly series Earth 2: Society more than anything else. Beyond that, a series of two-issue miniseries throw different characters and setting together in a sort of "what if?" set-up.

The event was conceived to paper over any disruptions in the editorial move from New York to Los Angeles, and given the fairly tedious concept (which Marvel appear to be set to duplicate soon in Secret Wars) I was happy to give the whole thing a miss and save a bit of money for the next two months. Then DC published Convergence: Hawkman. Damn it.

I have a bunch of weaknesses when it comes to the DC Universe. One of them is Hawkman: I just love the character. I love the look, and I love the various confused incarnations. I have collected entire runs of 1980s and 1990s series focused on the character, including Hawkman, Hawkgirl and Hawkworld. The New 52 incarnation of the character was the worst-ever, and yet I still found myself buying the book. Marketing types have a term for this kind of behaviour: irrational loyalty.

Of course, this being a mash-up comic there has to be another DC property to get shoved up into Hawkman's face, and somehow they managed to pick another one of my weak spots: Kamandi: The Last Boy on Earth. Or, at least, the advertising copy said they did. There's not very much Kamandi action going on here as far as I can see. Instead there's a lot of self-aware playing with plot elements from the late 1980s instead: Thanagarian politics, shadow wars and so on.

This is an unabashed exercise in nostalgia, from Jeff Parker's fairly direct and simplistic script to Hawkworld artist Timothy Truman's visuals. There's definitely a place for this; sometimes it's nice to just revel in something that reminds us of something we love. I do find it interesting that this one issue has the most likeable and engaging version of Hawkman and Hawkwoman in about a decade. (3/5)

Under the cut: reviews of Black Widow, Divinity, Ivar Timewalker, Kaptara and Ninjak.

This is a fairly brief affair this month: Natasha has been offered the chance to work for the enemy, an advanced organisation known as Chaos, and promised all of the happiness in the world if she just agrees to turn her back on the Avengers and SHIELD. It's a fairly facile dilemma, because we know going in that there's no way she's going to accept the offer. Her action-packed shenanigans to stay alive once she turns the offer down has a certain appeal, but that appeal is limited. For a book that was providing such strong entertainment on a month-by-month basis, Black Widow is in all honesty beginning to slip. This issue is good, when six months ago it would have been exceptional. (3/5)

A Russian cosmonaut was lost in space for several decades, only to return to Earth with enormous super powers. This has obviously worried some people, since this issue begins with the collected superheroes of the Valiant Universe teaming up to challenge and contain him. Their attack fails, although Ninjak's attempts to avoid Divinity's counter-attack make for some smart, very entertaining reading. Trevor Hairsine's pencils have really brought this story to life, and it's nicely distinctive from other Valiant books. It's a solid book: sometimes clever, generally enjoyable and with nothing really to let it down. (3/5)

Ivar is a time traveller, but this issue doesn't really focus on him. Instead he focuses on his companion Neela, who spends the entire issue and about 20 different iterations trying to save her father from dying. It's a complicated time travelling puzzle, one that will seem quite familiar to fans of Steven Moffat's tenure on Doctor Who. It's clever stuff, and well illustrated, even if the premises underneath the action are all a little bit predictable and derivative.The bottom line is that this kind of complicated, spaghetti-like story is damned hard to write well, and Fred Van Lente wrote it very, very well indeed. (5/5)

I've now read the first issue of Zdarsky and McLeod's science fiction comedy, and to be completely honest I really don't know what I think of it. It's reasonably funny in places, and I like that the humour is derived from the characters and not just shoe-horned in slapstick-style. It begins in a highly engaging manner as well, with a research mission en route to Mars.The gay Indian protagonist is a nicely distinctive touch, and feels natural to the story and certainly in no way cliched or tokenistic. The problem is that at the two-thirds mark the rug is pulled out from under the reader and by the end you're reading a completely different book. I think I preferred the original set-up to the one on which the issue finishes. I feel as if somehow the book has let me down a little. (3/5)

I have always found Ninjak to be a slightly odd character. He's an English billionaire turned ninja in the employ of MI6. It's basically as if his original creators Mark Moretti and Joe Quesada couldn't decide if they wanted to copy Bruce Wayne, James Bond or, well, or a ninja, and simply decided to copy all three at the same time. This issue sees the character infiltrating a global weapons manufacturing syndicate. For all my mockery, it actually is a pretty skillful blend of Batman, 007 and sword-wielding violence. Clay and Seth Mann's artwork has a nice sort of "Jim Lee" look to it, and the story moves along at a brisk, entertaining pace. I've really enjoyed diving back into Valiant's titles, and despite it's ridiculously on-the-nose premise I think Ninjak might be one of my favourites. (4/5)
Posted by Grant at 8:52 AM