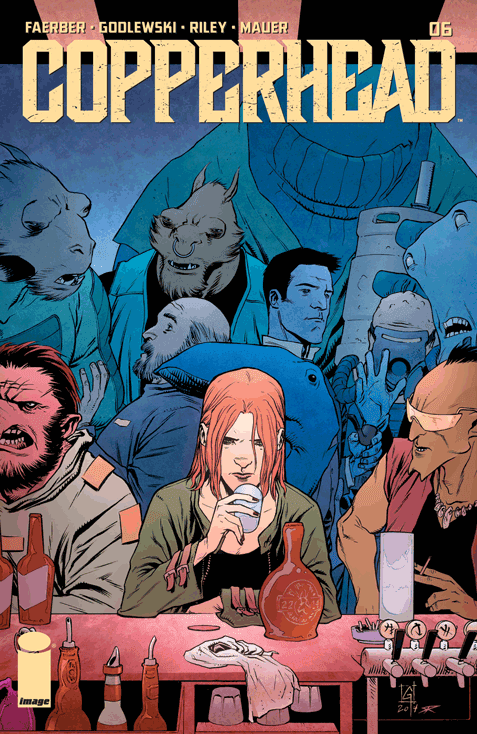 It's been quite a few years since Firefly departed from television screens, and despite one attempt at a revival it seems pretty likely that the space western TV drama is gone for good. Its fans continue to campaign for more space western goodness - I wonder if many of them have tried out Copperhead.

Copperhead is another space western, although in this case it wears its western influences a bit more boldly on its sleeve. It's set in a small frontier town. There are violent conflicts with the neighbouring indigenous population. It's a fairly rough, lawless community, with one bold, hard-minded sheriff named Clara Bronson trying against all odds to keep social order.

The first story arc was recently collected into a cheaply priced trade paperback, and this past week saw the book continue with its sixth monthly issue. It's the start of a new storyline, and as such a great opportunity for new readers to pick it up and run with it. I strongly recommend that they do: after a slightly shaky beginning this book has gone from strength to strength.

There's plenty to enjoy here: a sheriff balancing law-keeping with motherhood, a son who's befriended the most dangerous person in town, a slightly untrustworthy deputy who's being constantly tempted to betray his boss, a corrupt sheriff, and plenty more. The characters are really strong, and Scott Godlweski's artwork is fantastic. (4/5)

Under the cut: reviews of Nameless and ODY-C, plus late reviews of Plunder and Lumberjanes.

I actually missed picking up the second issue of Grant Morrison and Chris Burnham's new miniseries, and only realised it had been released when I saw the third issue on the shelf. So consider this a short review of both issues. It's basically Event Horizon, if Event Horizon had been written with Grant Morrison's particular brand of complex intertextual weirdness in mind. Enochian magic, references to John Dee, re-worked Russian moonbases, astronauts with religious symbols scrawled on their helmets - there's a lot to take it, but there's also a lot to get out of the book. It's graphically violent as well, which may turn off many readers. At the halfway point I'm liking this book more than I did in its first issue, but it's still nowhere close to either writer or artist's best work. (3/5)

I'm still absolutely adoring ODY-C, Fraction and Ward's science fiction gender-swapped free verse retelling of The Odyssey, but I do wonder just how many people are going to stick with it in the long term. It's about as niche a project as you can get: obscure, literary, weirdly sexual, oftentimes quite violent, and particularly odd. I hope it does find a stable audience because I really want its creators to see the story through from beginning to end. We need comic books like this, with a high profile and a style that challenges us as readers. (4/5)

Molly and Mal form a plan to get the Bear Lady's glasses back from the dinosaur that stole them, while the rest of the gang continue to struggle to earn any merit badges. I've really liked Carolyn Nowak's artwork in this short storyline: it is similar enough to the regular artwork by Brooke Allen, but distinctive enough that it has a personality of its own. Storywise it's all pretty much par for the course for this book, with is pretty delightful. (4/5)

I accidentally missed this second issue altogether, and I had been sufficiently intrigued by the first issue to want to give this another try. It's a horror comic, in which a group of Somali pirates board a cargo ship only to find its entire crew either missing or brutally torn to pieces. While the first part offered some intriguing opportunities - and a great distinctive hook with the Somali cast - the second part succumbs far too much to cliché and stereotype. What seemed at first to be a bit like John Carpenter's The Thing turns out to be almost exactly John Carpenter's The Thing. There are a few glimmers of creativity around the edges, and a great lead character, but all up this is a competent but annoyingly derivative book. It's only a four-issue series, so I may stick around to see how it improves, but one thing's for sure: there is a lot of room for improvement. (2/5)
Posted by Grant at 8:25 AM