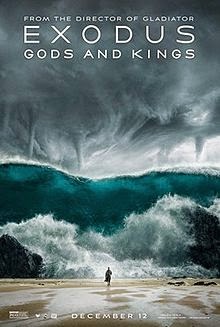 The story of "Exodus" is one with which Hollywood is very familiar, with multiple studios having produced all manner of feature film and television adaptations. It's not surprising: the story of Moses and the Hebrews' flight from Egypt has all of the elements of a thrilling epic: ancient kingdoms, cruel tyrants and enormous visual spectacle. On top of that it's a highly significant story in the religious texts of millions of people around the world.

The benefit of making a new movie about Moses is that you know there's a certain pre-built audience for the story, and that its various elements have already been proven to attract an appreciative mass audience. The drawback is that you're working within a very crowded piece of creative real estate: what can you bring to the screen that other directors did not? How far can you stretch the story before you begin offending the people whose religious beliefs incorporate it?

Exodus: Gods and Kings, from director Ridley Scott, is the latest attempt to tackle Moses for the big screen. It comes quite a few years after Hollywood's last major attempt (Robert Dornhelm's 2006 miniseries starring Dougray Scott) and benefits enormously from a generous $140m budget. It also suffers from creative indecision: it knows it wants to be an adaptation of the Exodus story, but seems uncertain about its own narrative approach.

Let's talk about positives first. Clearly, as a Ridley Scott production, it looks sensational. It has a visual aesthetic and an attention to detail that pops off the screen. It has a beautiful sense of scale, and despite its length running time never particularly drags or slows down. Alberto Iglesias' musical score is beautiful to hear, and matches the visuals perfectly.

As Moses Christian Bale gives his most relaxed and naturalistic performance in years. Playing Batman in Christopher Nolan's Dark Knight trilogy appeared to sideline his talents for some years, so that in other films he would appear to duplicate Batman's weird combinations of gravelly whispers and fierce shouting. Terminator: Salvation is a key example of that. Here he pulls everything back, and gives a remarkably humanistic and troubled portrayal. Likewise Joel Edgerton is remarkably strong as Rameses, the Egyptian Pharaoh whose subjugation of the Jews sets the story into motion. The film is packed with quality actors in supporting roles, including Ben Kingsley, John Turturro and Sigourney Weaver, but they are for the most part unexpectedly brief.

Race is a problem: Scott deliberately goes for a more grounded and realistic telling than one might ordinarily see, yet the casting of Caucasian actors in Egyptian and Middle Eastern roles works directly counter to it. Time has moved on, as has the ethics of cross-racial casting. 30 years ago an almost entirely white cast would pass by unnoticed. Today the audience notices these things. I understand that certain commercial realities demand that a major star must headline a movie to warrant a large production budget, but did we need an Australian as the Pharaoh and an American as his mother? Did we need John Turturro as his father? Hollywood excuses itself for not casting people of colour because they're not famous enough, but they never will be if they aren't given the chance to appear on screen.

While racial controversy was certain the film's biggest problem in the lead-up to release, it's actually secondary to Scott's problems with the story. Basically there are two clear routes to take with this story: either present it in keeping with the Biblical story, with all supernatural and earth-shattering plagues and torments intact, or present it as a realistic story based on the same basic set-up. For the bulk of the film Scott takes the braver path: Moses might be talking to God, but he might be schizophrenic. The plagues might be divinely inspired punishments, or they might simply be an unfortunate chain of natural occurrences.

This all works perfectly well up to a point, and that point is the 10th plague. There's no easy method to provide a rational explanation for every Egyptian first-born child to die on the same night, but every Hebrew child to be spared. As a result, Scott throws away all of the work made in keeping the film ambiguous to satisfy the needs of one scene. Once this scene is passed Gods and Kings is a significantly less interesting movie. There's the expected climax, with the parting of the Red Sea, but it feels too much like contemporary Hollywood: a visual effects extravaganza rich in eye candy but low in nuance or soul.

It's all a deep shame. The film begins with so much promise, but by its closing titles - and despite some superb performances and visual storytelling - it feels nothing much beyond redundant. Hollywood has been here before. It will be here again, and whenever that is it's likely audiences will barely remember Ridley Scott's contribution at all.
Posted by Grant at 6:36 PM