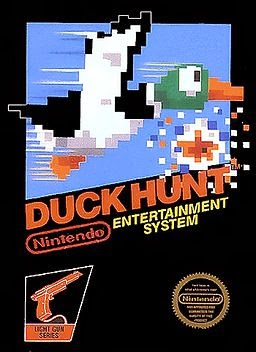 Let's be honest: Duck Hunt had turn up somewhere on this list. For many gamers the title was packaged in with the NES, making it - alongside Super Mario Bros - one of the most commonly-played games on the console. It had its origins in a 1976 electronic toy designed by Gunpei Yokoi and Masayuki Uemura, the Beam Gun. When that toy became a massive commercial hit in Japan it seemed logical to re-develop the concept for Nintendo's first home console, the Famicom. From there it was a quick translation job to release the game for the NES as well.

It is, to be fair, a limited game experience. There are three game modes, but all of them involve pointing a handgun peripheral at the TV screen and shooting whatever targets pop up - basically either flying ducks or clay pigeons. There are some neat touches - a second player can control the ducks using the standard NES controller, for example - but altogether it's hardly the most exciting gameplay ever designed.

Where it excels, however, is in the physicality of it. As the player you're no longer manipulating a controller to simulate aiming a gun at things, you get a proper plastic replica gun with which you can shoot at those things yourself. There is a tactility to the game that really felt unprecedented at the time, and it foreshadows many of the games produced for the Nintendo Wii some decades later. While the gameplay itself is simple and limited, by extending the experience out of the virtual and in part into the physical, Duck Hunt gains an impact you simply didn't get from other console games.

The NES Zapper peripheral worked with 18 different NES games, although for most players Duck Hunt was pretty much the only game with which they would use it. It's still an iconic piece of Nintendo hardware, often remembered with considerable nostalgia.
Posted by Grant at 5:00 PM