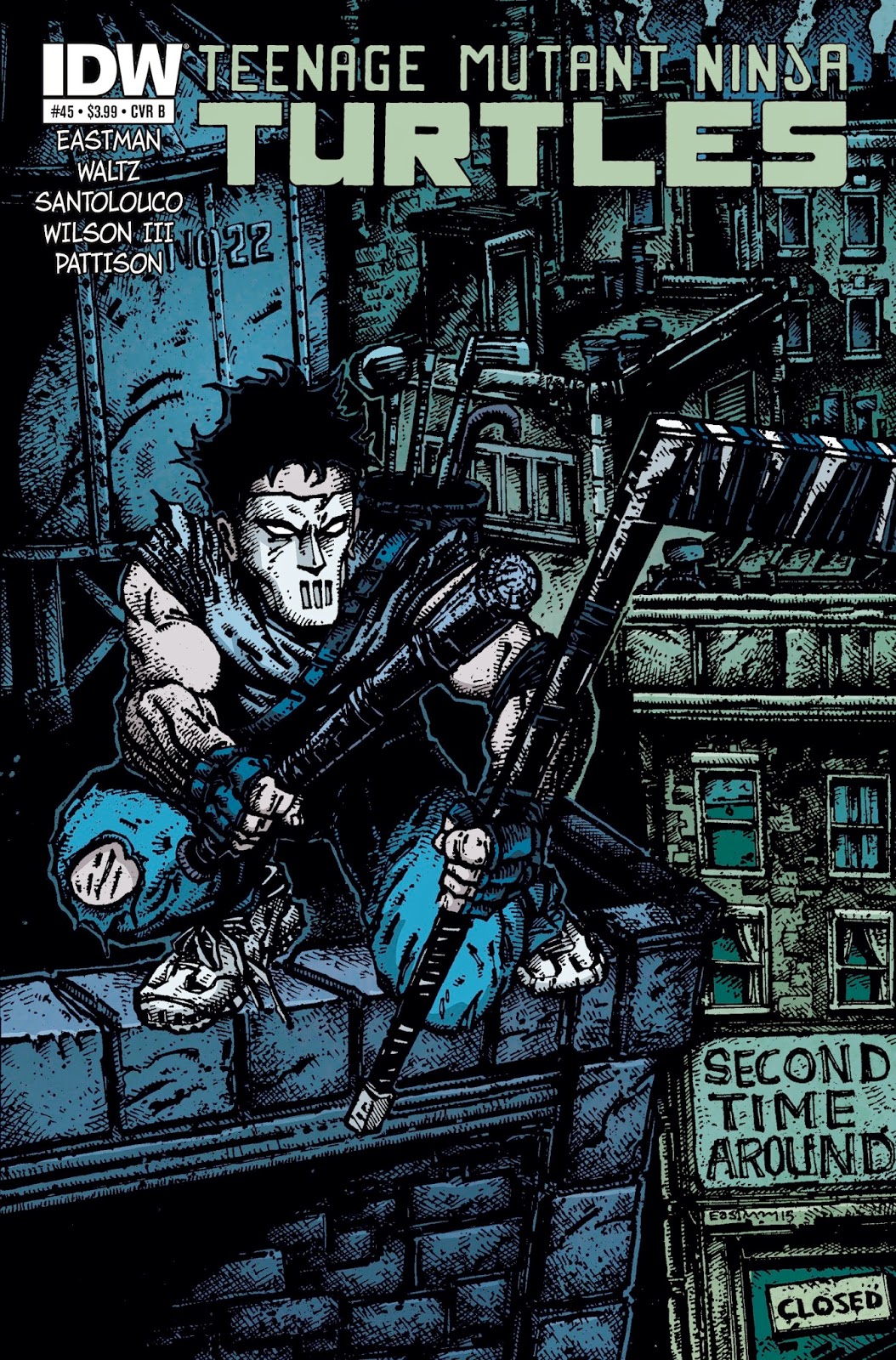 Last month Teenage Mutant Ninja Turtles grabbed a lot of attention with its cliffhanger ending that appeared to show Donatello beaten to death by Bebop and Rocksteady. It's probably not a huge spoiler to reveal that, like most readers suspected, Donatello isn't quite dead yet, but whether he survives or slips away is still something open to question. Which way his spirits goes is one of the core elements of issue #45, out this week from IDW.

I've always been a huge fan of the Ninja Turtles, yet it's been a weird sort of love that's encompassed multiple television cartoons and the Steve Barron feature film yet never really extended to the original comic book. I honestly wouldn't be able to tell you why: this issue is a lot of fun, with distinctive art styles to separate the real world and Donnie's near-death experience, and a wide variety of appealing animal-martial artist hybrids.

The storyline is, of course, in full flight, and that makes entirely following the plot a little tricky. On the other hand this is issue #45, so a little disorientation with starting here is to be expected. All up, it was a really enjoyable read. It does reek a little bit of pulling the football away just as Charlie Brown's about to kick it ("Donatello's dead!! Haha, no he's not!"), but there's enough else here to paper over any faults. (3/5)

Under the cut: reviews of Brides of Helheim, Hellbreak, Jem and the Holograms, Judge Dredd, Quantum and Woody Must Die, TMNT: New Animated Adventures and Transformers: More Than Meets the Eye.

Brides of Helheim is a rather striking Norse-inspired dark fantasy from writer Cullen Bunn and artists Joelle Jones and Nick Filardi. It's the art that made the strongest immediate impression: it's stark, slightly stylised and boldly inked, grabbing the eye and telling the story very well too. Cullen Bunn's script is a little bit hard to entire follow - this is the first issue I've read of the book - but certainly it stands up well enough on its own that I'm keen to read more. It's a striking and rather bleak fantasy saga, and if that grabs your fancy then you should absolutely check it out. (3/5)

Another Cullen Bunn comic, and this one has a particularly cool premise: when a demon possesses someone in the real world, that person's soul gets trapped in hell. The only way to exorcise the demon is to head right down into hell and retrieve the soul first - and that's where Orpheus Team comes in. Imagine a horror-themed Stargate SG-1 and you'll be on the right track. Clean, slightly cartoony artwork shaves the edge of the book just a little, but it's all in aid of telling a fairly thrilling story that plays with archetypes and genre expectations in an immensely readable fashion. It's great stuff. (4/5)

Jem and the Holograms #2

I really enjoyed the first issue of this re-imagining of the popular 1980s cartoon, but this second issue is actually much stronger. Thompson introduces the Misfits, the rival band to Jem and the Holograms, and we actually get to see both bands perform. Showing a live music performance or a music video in a comic book is actually a pretty difficult thing to do, but Sophie Campbell pulls it off marvellously. The characters are great as well, with each given room here to develop and demonstrate some proper nuance and dimensions. (4/5)

I find this a slightly odd book: Judge Dredd's adventures have been published in the UK for decades via the anthology comic 2000 AD, and that book is still going strong over there. Despite that, for the past two years IDW has been publishing its own Dredd comic with all-original stories. This issue marks the beginning of a new storyline, so it seemed an appropriate time to dive in and see what it's like. First and foremost I love Nelson Daniel's art, which is abstracted enough to allow for pretty savage satire should the script demand it - and really satire is what Judge Dredd is best designed for. Sadly the Swierczynski script doesn't really head in that direction. There's a feeling of punches being pulled, not to mention some fairly complex back story that takes a few pages for the new reader to unravel and work out. This was intriguing stuff, but not entirely gripping. (2/5)

Quantum and Woody Must Die #4

I used to read the original Quantum and Woody comic back in the day, and it's nice to see that even a few decades later they're still the light-hearted, slightly absurd characters they always were, and that they've still got the goat. This was the fourth and final issue of a miniseries, so there's little point in me recommending you just pick up this issue, but based on what I've read here I'm certainly interesting in picking up the whole series once it's collected into a trade paperback. If you're looking for some slightly aimless, fairly amusing superhero comedy, you should probably check this book out. I'm assuming another miniseries is on the horizon; they're certainly popular and effective enough to warrant it. (3/5)

Baxter Stockman and Spider Bytez have teamed up on a series of heists, and now they have the Turtles in their sights. It's an entertaining enough primary story, with some funny lines and moments, but the real star with this issue is the back-up story. It's basically the Turtles playing tag across the rooftops, except it's been entirely illustrated from a first-person point of view. It's a beautiful example of how the artwork of a comic book can completely lift and transform even the simplest of storylines. It may seem weird to give top marks to a media tie-in book, but it it's genuinely clever and eye-catching stuff. (5/5)

Transformers: More Than Meets the Eye #40

I had heard some pretty great things about this comic, but I honestly wasn't expecting to find it as brilliantly entertaining as I did. This issue covers the aftermath of some enormous climax, and to be honest not knowing what that climax was didn't spoil my enjoyment of this book one bit. It's a surprisingly funny story, with a group of Autobots and Decepticons living together in a sort of truce on a spaceship somewhere far out in the galaxy. The focus is on the character Ratchet, if you ever had that toy as a child, but it covers a lot of different robots while giving them all distinctive personalities and storylines. It's top stuff: making character comedy out of the franchise without ever losing respect for it. (4/5)
Posted by Grant at 6:08 PM