Robin of Sherwood: "Robin Hood and the Sorcerer, Part II" 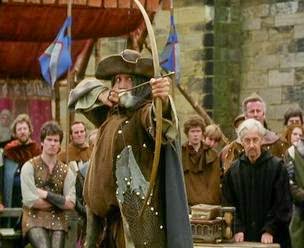 It's one hour later on 28 April 1984, and time for part 2 of "Robin Hood and the Sorcerer". The first two episodes of Robin of Sherwood were originally broadcast as a made-for-television film, whereas internationally and on the official DVD releases it's been split out into two 50-minute episodes. That's how I've recently rewatched them, and correspondingly how I've elected to review them.

Sir Robert de Rainault, the Sheriff of Nottingham, uses the stolen silver arrow of Herne the Hunter as bait to lure Robin Hood into a trap. When that attempt fails, with Robin winning an archery tournament and reclaiming the arrow, the devil-worshipping Simon de Belleme comes to the Sheriff with an offer to kill Robin for him, taking Maid Marian as his captive in return.

This second part falls broadly into two halves. The first sees Robin infiltrate Nottingham to compete for and win Herne's arrow. The second sees Robin travel to Belleme's coastal keep to rescue Marian. It's testament to the strength of the episode that each half is fairly different in tone - one fairly light and adventure-based, and the other quite dark and foreboding - yet both fit together remarkably well as a single episode.

The archery contest is a classic and perennial part of the Robin Hood story, and it's played out here in a broadly familiar fashion. The specifics of this particular series do affect it a little: Robin shoots against not only the Sheriff's champion but also Nasir, an archer and swordsman in Belleme's employ.

It's worth taking a closer look at Nasir. He's a Saracen (albeit one played by non-Arabic actor Mark Ryan). He doesn't speak. He wears black in a series where nearly everyone wears green or brown. He's clearly a competent archer, although during the tournament he appears to receive supernatural assistance from Belleme's magic. He fights with a pair of swords in a markedly different style to the rest of the cast. After being defeated by Robin at the tournament he turns up again just after Robin has killed Belleme. He duels with Robin briefly, and then lets him go. At the end of the episode he simply walks up and meets Robin and the Merry Men. By episode three he's just an accepted member of their band.

What's most fascinating about Nasir is not the supremely laid-back way in which he is incorporated into the cast, but just how seamlessly his character fits into the series. It's so convincing that the producers of the American film Robin Hood: Prince of Thieves saw Ryan's portrayal and simply assumed he was part of the legend they'd never read about, and placed their own Saracen swordsmen into their version - who was hastily renamed Azeem when a stunt coordinator who'd worked on both productions let slip that the character was entirely Richard Carpenter's invention.

The episode's climax is remarkably dark. It isn't simply a matter of Robin's fight against Simon de Belleme's supernatural magic, or Belleme's planned ritual sacrifice of Marian against a massive wooden pentagram. During the heroes' final escape from Belleme's keep both Tom and Dickon are killed by the Sheriff's soldiers. Over the first two episodes they've enjoyed almost as much screen time as Friar Tuck, Little John or Will Scarlet, and one would assume they'd continue through the series. Killing them both so abruptly raises the stakes very effectively: this isn't a run-of-the-mill family adventure series. Characters could still die.

The episode ends with Robin and Marian's wedding, overseen by Herne himself. It's a rather abrupt development for two people who have only just met each other, but I guess that's the way they roll in medieval England. Thankfully Richard Carpenter does address their speedy courting in the third episode.

This really is great stuff, and it's all aged surprisingly well. The Clannad soundtrack is going to grate slightly for the entire series - it's a little too out-of-date for modern ears, and there are a few too many musical tracks mixed in to avoid making it repetitive. It must be said that those who like the Clannad soundtrack seem to positively adore it, and I feel I may be in a minority in not quite fully warming to it.
Posted by Grant at 10:13 PM