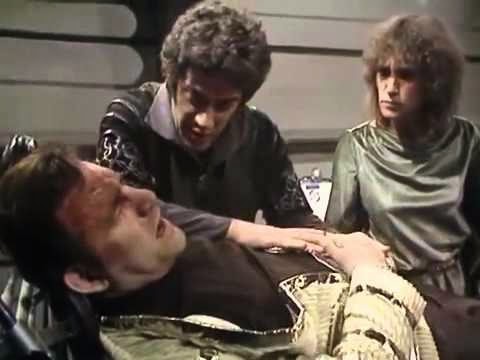 The Liberator observes a spacecraft break up in the atmosphere of the planet Cephlon. While on the surface trying to rescue the ship's sole survivor, Jenna is kidnapped by the local primitives. When the survivor wakes up on the Liberator he holds Blake and Cally hostage. Meanwhile Avon, Gan and Vila's hunt for Jenna is sidetracked when Avon meets a woman who thinks he's a good.

Once again we have a story of two halves, but at least this time they're interwoven throughout the episode so it isn't quite so weird to sit through. The only problem left is that one of the halves - Avon becoming the salvation for a long-dead civilization - is actually pretty terrible television. I sense the influence of script editor Chris Boucher here. While it's an awful storyline (a young woman who is the latest in generations of people left to wait for someone to activate a rocket containing the genetic banks of a dying race mistakenly believes Avon is a god) it does have a remarkable number of funny lines. Blake's 7 is always at its best when Avon and Vila engage in banter, and this episode has a truckload of it.

The storyline in orbit is much more interesting. The survivor, Ensor, has just sold a mysterious technology named "Orac" to the Federation for one hundred million credits. He is now racing back home with badly needed power cells that keep his disabled father - Orac's creator - alive. Of course the only reason he ship exploded in the first place was because Supreme Commander Servalan (Jacqueline Pearce returning for a third episode) placed an explosive charge there before he left the negotiations. All she needs do now is wait the elder Ensor out until he dies without his urgently needed power cells. The episode cuts across several times to Servalan and Travis (Stephen Greif) as she reveals her plan and makes preparations to travel to Ensor and take Orac for herself.

It's intriguing because at this stage, and indeed by the end of the episode, we have absolutely no clue what Orac is. We know it's immensely valuable, we know that it's some sort of invention, and we know that everybody wants it. Beyond that we're in the dark: despite this episode's faults it's a marvellous lead-in to the season finale.

Back on Cephlon, however, it all a little hard to stomach. Jenna (Sally Knyvette) gets sidelined almost immediately, and doesn't get seen again until Avon rescues her. Suzan Farmer is saddled with some positively dreadful dialogue as Meegat, the guardian waiting for her god to come and save her people. It's only really Paul Darrow as Avon who walks away from the scenes with his dignity fully intact: he's an actor with a gift for treading deftly through bad material, working the few good moments for all they're worth and quickly negotiating through the bad parts.

There's important plot information here that affects the future of the series, so this is a tricky episode to skip. That's a pity, because the odd scene or moment aside this is a fairly poor episode. We're 12 episodes into Season 1, with one episode to go. Seven episodes have been good: that's a quality ratio of 58 per cent.
Posted by Grant at 8:54 AM