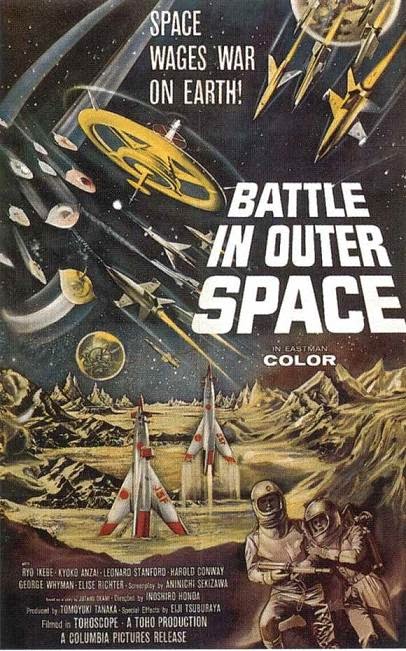 A series of natural disasters across the Earth are revealed to be the work of alien invaders, preparing to take over the planet from their secret moonbase. Etsuko Shiraishi and Kenjiro Adachi, two scientists who defended the Earth against the dreaded Mysterians, reunite to lead a mission to the moon in order to destroy the alien base before it is too late.

Battle in Outer Space is the 1959 sequel to The Mysterians, the 1957 science fiction drama directed by Ishiro Honda. That film had the alien Mysterians actually arrive on Earth and attempt to steal the planet's women for breeding purposes. The aliens in Battle in Outer Space are never actually seen in person: they maraud the skies in flying saucers and simply want to wipe out the humans and colonise the planet for themselves. As a result this is a much more simplistic film than its predecessor, but it does retain a sort of naive charm that a lot of viewers might find quite charming.

Honda returns to direct this second film. He remains of course most famous for directing the original Godzilla in 1954, and continued to direct numerous films in Japan's tokusatsu ('special effects') genre. Takashi Shimura did not return as Dr Adachi, and has been replaced by Koreya Senda (Life of a Woman, Gate of Hell) who does a solid job with a rather two-dimensional character. Likewise Shiraishi is no longer played by Yumi Shirakawa but instead by Kyoko Anzai. As a result the film feels like the loosest sort of sequel: no crossover in cast, no particular crossover in story, and a completely different set of villains.

The film's various model and special effect sequences are its main selling point. They're relatively primitive and cheap, but occasionally a shot will leap out at you. Much of it remains highly impressive even now, more than five decades later. Also unexpectedly impressive is Yoshio Tsuchiya (Seven Samurai) as Iwamura, a member of the rocket crew who falls under the mental control of the invading aliens. In a film packed with identically bland characters, he stands out as some with a bit of internal conflict and personality.

This is definitely a second-tier Honda production. Anyone wanting to sample the director's works should absolutely start with Godzilla, Mothra and The Mysterians. Assuming they're to your taste, then you'll likely find plenty to enjoy in Battle in Outer Space as well.
Posted by Grant at 5:03 PM