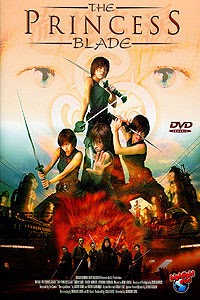 It is several centuries into the future. Yuki, the most talented young member of the Takemikazuchi assassin clan, discovers that the clan's current leader murdered her mother. On the run from her fellow ninjas, she hides in the home of a reluctant former resistance leader. While they share a bond, and tentatively moves towards a romance, neither of their pasts is willing to let them go so easily.

The Princess Blade is an odd little Japanese movie. It was clearly made on a very small budget, and it spends its money judiciously on elaborate sword fights in forests for each of the film's three acts. In between there's a hell of a lot of talking but very little showing.

It's set centuries into Japan's future, however there's one shot in the entire movie that actually reflects that future society. There's a rebellion against the totalitarian government, although we never see any acts of rebellion and don't ever see the government. The film focuses in part on a clan of katana-wielding assassins, however they spend most of their time trying to assassinate each other.

I can appreciate the film's approach to an extent, but by the end it does feel a little like that joke about the 1960s BBC television production of Zulu, in which one man pokes his head out of a tent and exclaims "there's thousands of them out there!" A little ambition can go a long way but not, in this case, as far as the story probably requires.

One of the real surprises of the film is that it is adapted from Kazuo Koike and Kazuo Kamimura's popular manga Lady Snowblood, which had already been the source of two highly successful films in the 1970s. This vague science fiction re-imagining doesn't really bring anything of note to the production, and had I not seen the two Kazuos' names in the credits I likely would not have realised it was an adaptation at all.

Yumiko Shaku plays Yuki with a combination of wide-eyed stares and mournful silences. Hideaki Ito plays her love interest Takashi with a combination of awkward pauses and hairstyling. To be honest it's only Kyusaku Shimada as the film's villain Byakurai who offers any real amount of charisma or personality. One solid actor gets spread pretty thinly over 90 minutes.

In the end this is a movie where you find yourself gently applauding the effort while furtively checking your watch at the same time to see how long it is until the credits roll. Director Shinsuke Sato progressed to much better films in recent years, including the GANTZ duology and the charming All-Round Appraiser Q. The Princess Blade spends a lot of its time feeling like a student film: a clear result of effort, but hardly worth putting down real money to see.
Posted by Grant at 7:08 AM