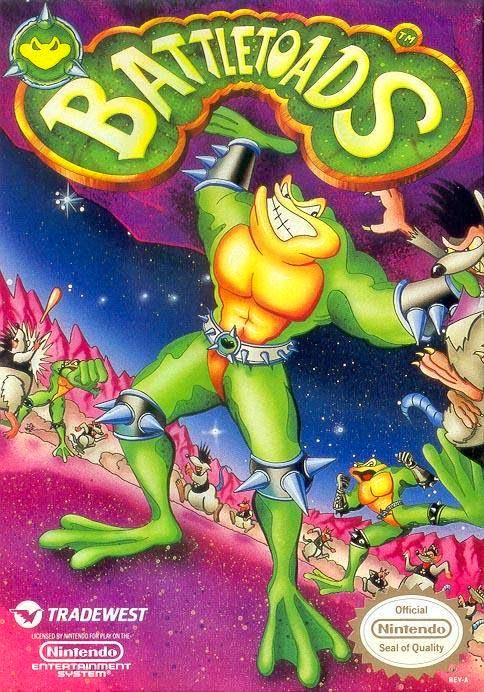 Let's take a break from platform games for a moment to appreciate another fabulous genre of the 1980s and early 1990s: the side-scrolling beat'em'up. It's a pretty simple concept: the player controls a character as they walk from left or right across a scrolling environment while beating up waves of enemy fighters, whether with bare fists and feet or with swords, knifes, what-have-you. The most famous example of the genre is likely Double Dragon. One of the most enjoyable examples on the NES was Battletoads, a 1991 beat'em'up produced by English developer Rare.

During the SNES and N64 eras Rare became a critical second-party developer for Nintendo, producing a range of great and hugely successful games including GoldenEye 007, Donkey Kong Country, Perfect Dark and Killer Instinct. Battletoads was a much earlier game, chronologically speaking, but still managed to grab a lot of attention with its appealing characters (anthropomorphic alien frogs) and its challenging gameplay. It was Rare's 38th game produced for the NES, and absolutely one of their best.

Battletoads had the dual advantage of a skilled and experienced development team, and a release somewhere towards the end of the NES' life-span. It exploits all of the sound and graphical tricks learned over five years of game production, and as a result the characters look and move well on screen, and the music is really enjoyable. It is a fun, slickly produced, immensely entertaining videogame.

For a while Battletoads flirted with mainstream success. An animated television pilot was produced, but sadly never made it to series. Sequels and spin-offs were released, including a Double Dragon/Battletoads crossover title, but they never quite managed to sell enough copies to become a long-term commercial concern. Today the franchise sits relatively fallow, waiting for an enterprising publisher or console manufacturer to pick up the rights and make something out of it.

For those of us playing NES games back in 1991, however, there isn't a need for a reboot or relaunch - we've still got such fond memories of the original.