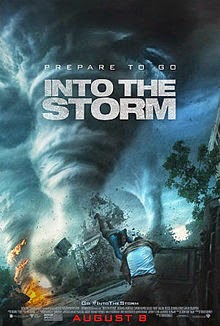 So: Into the Storm. The lives of a TV documentary crew, a high school deputy principal and his estranged sons, and a pair of clueless thrill seekers collide when an unprecedented series of tornadoes strike a small American town. I suppose it had been 18 years since Jan de Bont's Twister was in cinemas, so maybe it was worth having another crack at a tornado-centric disaster film.

Then again, maybe it was not. It turns out that Into the Storm is a disaster in more ways than one, as it features bland and broadly-drawn characters, a loose and inconsequential storyline, towering piles of genre stereotypes and a seemingly confused attitude towards what sort of film it wants to be. Its director, Steven Quayle, worked as second unit director to James Cameron on Titanic and Avatar, and before that in various capacities on The Abyss, Terminator 2 and True Lies. I assume he wasn't paying attention back then, because the direction on this film is bizarrely amateurish.

Here's the thing: at the most rudimentary level Quayle - and we should probably rope in writer John Swetnam here as well - doesn't know what style of production he wants to make. It begins using a found footage technique, as popularised in The Blair Witch Project and Cloverfield. That's a perfectly valid angle to take: it locks the viewer into a single perspective, and has a lot of opportunity for intense drama presented from a very personal, ground-level point of view.

Then he suddenly starts presenting scenes shot in a conventional narrative fashion. After that he begins to mix the two, without warning or obvious agenda. By the end of the film I was scratching my head on a shot-to-shot basis, attempting to work out if I was watching from the point of view of a character's camera, the point of view of another character's camera, or just a standard third-person angle. It's distracting and very poorly thought-out.

Plus there's the problem of the story he's actually telling, and here the blame likely does lie with John Swetnam's screenplay. Every character is a cliché. Every line of dialogue you can pretty much guess before the character says it. One character seems particularly odd: Pete the professional storm chaser. Throughout the film he's an arrogant bastard who visibly and consistently favours getting the best video footage of the tornadoes for his documentary over helping other people or saving victims. By every standard of this kind of stereotypical disaster movie he should die as a result of his own hubris, but instead he dies in a highly noble self-sacrifice. There's no transition from one to the other, just a sudden change in characterisation during the film's climax. Even when stuck inside a well-worn formula Into the Storm can't seem to get it right: it doesn't just obey clichés, it confuses them.

There's one stand-out scene in the film, in which a tornado passes over a large fire and whips the flaming debris up into itself. I have no idea if that's physically possible, but it was an arresting image and looked rather cool. If I can only think of one ten second sequence to recommend for this film, it's probably not worth me recommending this film.
Posted by Grant at 9:51 PM