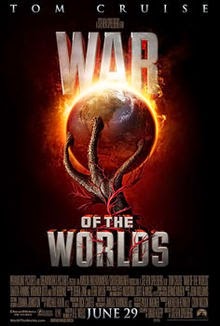 War of the Worlds, Steven Spielberg's rather loose adaptation of the popular H.G. Wells novel, is not really a very good film. What it is, however, is a rather excellent collection of scenes and set pieces. Each one is meticulously crafted, emotionally effective, and visually arresting. Watched on their own merits, they demonstrate a world-class director showcasing the sorts of moments and thrills upon which he built his reputation. Watched altogether, and they reveal a rather messy and oddly truncated failure: one of those odd films where the parts are worth more than the whole.

Ray Ferrier (Tom Cruise) is a New Jersey crane operator who flees the city with his children (Dakota Fanning and Justin Chatwin) when a freak lightning storm strikes and a massive alien tripod climbs up from beneath the ground and starts killing everyone in sight. As they attempt to journey from New Jersey to Boston, and reunite the kids with Ray's estranged ex-wife, they discover an alien invasion on a global scale.

One thing I have always loved about War of the Worlds is its intimate scale. The film does include several sequences of large-scale carnage and destruction, but its point of view is strapped tightly to Ray and his kids Rachel and Robbie.

Ray is a completely ordinary person - in fact he's arguably slightly less competent than an ordinary person - so he never saves the world, or rescues hundreds of people. At his best he rescues maybe 12 or 15 people, and even then they're the collateral benefit of saving his daughter. In many respects this film feels like the story of what happens to normal people in the background of Independence Day, and it's a stronger, more well characterised film as a result.

Ray's journey from Jersey to Boston takes in a series of exceptional vignettes, whether it's the initial arrival of the tripods or an airliner crashing into a two-story house while Ray and his kids cower in the basement, or an attempt to cross the Hudson River, and so on. Each scene is meticulously constructed, and ably reflects the different responses of human beings to such overwhelming trauma. Some only want to help. Others want to fight. Even more simply turn murderous in an attempt to survive. All of these scene work remarkably well in isolation, but don't quite pull together into a tidy three-act narrative. The film's climax, for example, comes very suddenly and out of left field: it may be partially adapted from the original text but still feels abrupt and unsatisfying in the confines of a mainstream Hollywood blockbuster.

Then there's the weird issue of Ray's son Robbie (Justin Chatwin). He runs away halfway through the film, sprinting headlong over a hill into an obvious kill zone. There's no proper explanation given as to why he does this - he just does - and Ray is left to mourn him afterwards. Then, in a frankly bizarre and tonally misjudged epilogue, Robbie turns out to not only have survived, and survived without a scratch, but has actually beaten Ray and his sister to his mother's house - which is weirdly situated on the one street in the city that doesn't appear to have shot up to hell by alien death rays.

A particular standout is Dakota Fanning as Ray's young daughter Rachel. In the mid-2000s Fanning was the unparalleled champion of the traumatised child, and her work on War of the Worlds probably showcased her at her peak as a child actor. She gets most of the best lines, and really sells just how terrifying such an event would be for a young mind. One can only imagine the therapy her parents are going to have to pay for in the years ahead.

War of the Worlds is such a mixed bag. It's an odd combination of brilliant scenes that simply don't add up to an appropriately brilliant film. It's still enormously entertaining, and the various talents of the cast and crew are clear to see. In the end, something simply didn't quite add up.
Posted by Grant at 11:15 PM