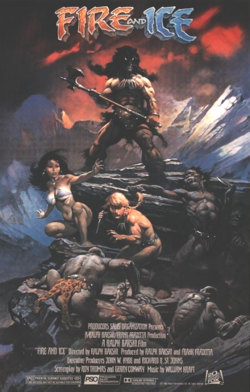 The early 1980s were a boom time for American fantasy cinema. While the period only inspired a few genuine hits, such as John Milius' Conan the Barbarian, that didn't stop a whole raft of directors and studios from launching their own potential fantasy blockbusters. One of those directors was independent animation legend Ralph Bakshi, who teamed up with his friend - and noted fantasy illustrator - Frank Frazetta to create Fire and Ice, a deliberately pulpy fantasy saga of warriors, scantily-clad princesses and evil wizards.

The film focuses on war between Icepeak, ruled by Queen Juliana and her sorceror son Nekron, and Firekeep, ruled by the stern warrior king Jarol. Jarol's daughter Teegra is kidnapped by Nekron's soldiers, and it is up to a barbarian named Larn and a mysterious warrior named Darkwolf to rescue her - and to defeat Nekron once and for all.

Bakshi had openly admitted that his contribution to this film was pretty much helping Frazetta realise his own vision, and that vision seems to have been to make a Conan movie with the serial numbers filed off. The film's visual design was solely conceived by Frazetta - a regular cover artist of Conan books - while the screenplay was written by Gerry Conway and Roy Thomas - pretty much the most popular and longest-running writers of Marvel's popular Conan comic book. Frazetta has imagined a world where a muscular barbarian rescues a scantily-clad princess, and where all magic is by its very use fundamentally evil: that's pretty much Conan in a nutshell. As a result of all of this indulgence on archetype, the level to which one enjoys Fire and Ice relies fairly heavily on the level to which one already likes Frazetta and Robert E. Howard (creator of Conan).

As with Bakshi's earlier fantasy film The Lord of the Rings, much of Fire and Ice is animated using a rotoscope technique: that is, footage was shot of actors on a soundstage and the animation was then drawn on top of those actors' movements. The result is something of a double-edged sword: it provides startling realistic motion and depth, but comes at the cost of making some of the scenes feel slightly flat and cold. There is an energy that comes from proper hand animation - all the slight quirks and exaggerations - and rotoscoping fails to provide that.

There are definitely some highlights. Nekron is a solid villain, and very well played by Sean Hannon. A climactic flight through Nekron's lair on the back of giant pterodactyls is wonderfully animated (in part by future Aeon Flux creator Peter Chung). It's also a very tightly edited film at 81 minutes and certainly doesn't outstay its welcome.

On the other hand the film seems genuinely leery in its treatment of the princess Teegra, who spends the whole movie in an improbable "barely there" bikini - even while held captive inside an Arctic ice prison. She's pretty much portrayed as a damsel in distress for the entire film, which even by 1983 standards was getting a little risible. By 2015 standards she's close to unwatchable.

Like all of Ralph Bakshi's films, Fire and Ice is an uneven mixture of good elements and bad. As an adaptation of Frank Frazetta's art style it's difficult to fault. As a pulp adventure it's suitably thrilling. As a genuinely good feature film? That's a little bit trickier to justify.
Posted by Grant at 9:50 PM