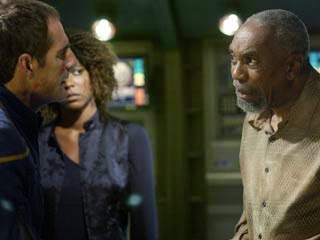 The Enterprise plays host to Emory Erickson, the inventor of the transporter. As Trip (Connor Trinneer) aids Erickson in his latest experiments in long-range matter transportation, a strange etherial presence begins to appear in various parts of the ship - often with fatal results. It soons becomes clear that Erickson has not been honest about the nature of his mission, and the entire crew may be in danger.

I suppose I should be careful what I wish for. After despairing at the drawn-out and fairly tedious continuity-laden trilogies of Season 4, I get a nicely self-contained episode for once. Sadly it's not a very good one, suffering from a predictable storyline and some very inconsistent character work. The regular cast appear to do their best, as do guest stars Bill Cobb and Leslie Silva, but they're fighting an uphill battle. The bottom line is that Ken LaZebnik and Michael Bryant's script isn't good or original enough to make the battle worthwhile.

There are a few highlights. It's nice to see T'Pol and Trip's romance addressed following the annulment of her marriage. He's clearly keen to rekindle something; she says she wants to focus on reading Surak's Kir'Shara that was revealed in the last episode. It feels like a lie, and certainly Blalock appears to play it as such. It's a needed excuse for a woman still mourning her mother's death to have some space and be left alone.

It's funny to see Erickson rattle off what he considers a list of all the irrational and unlikely concerns he's heard about transporter technology: pretty much every single one forms the basis of a Star Trek: The Next Generation episode.

Then there are the drawbacks. Captain Archer (Scott Bakula) seems wildly off-base in this episode, shouting Trip down and even threatening him with charges for insubordination. In nearly every other episode he would listen to his friend's concerns and pro-actively work to solve the problem. While it's established that Archer's a long-standing family friend to Erickson, it still doesn't explain why he's acting so erratically.

The core storyline - that Erickson's son was lost in a transporter accident, and Erickson is now risking everyone's lives to bring him back - is obvious the moment the son's death is mentioned. This episode wants to build foreshadowing with a jackhammer; anyone who doesn't see every plot point approaching is likely asleep from boredom.

I really wish I knew what had happened with this season. The first three years of Enterprise, while not often the best television ever made, were remarkable consistent. It feels like this season is all over the place; every time it places a foot right it promptly shoots the foot. We're now 10 episodes in, and by my reckoning only four of the episodes have been worth a damn. That's a quality ratio of 40 per cent.
Posted by Grant at 8:45 AM