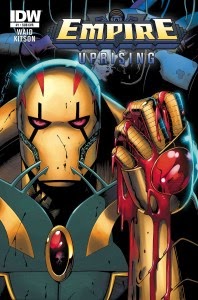 All the way back in 2000 Mark Waid and Barry Kitson collaborated on a science fiction comic titled Empire. It depicted a world beyond where most superhero stories end, in which a Doctor Doom-style villain has not only defeated and killed all the heroes but taken over the world. It wasn't the story of how he, Golgoth, was finally overthrown. It was the story of how he remaineded in power. Despite having a great hook, beautiful art and a strong script, it folded after just two issues. DC Comics came to the rescue, and published an entire six-issue miniseries by Waid and Kitson, which was also collected into a trade paperback. That was it, though. Until now.

Empire Uprising is a new series, reuniting Waid and Kitson with Golgoth. It's been serialised online at Thrillbent Comics, and now it's also coming out in a monthly print edition via IDW.

It has been a year since the death of Golgoth's daughter, and while the entire planet observes a compulsory three minutes' silence a team of resistance fighters make a play to invade Golgoth's palace. Meanwhile the supreme leader's lieutenants begin to question whether their master's attention to his rule may be slipping.

This is a strong, reasonably self-contained opening chapter that carefully sets up both the new storyline and re-establishes the kind of world in which it is set. Readers of 2000 AD will feel right at home with this book, thanks to its Dredd-like combination of satire and violence. Readers who can remember the original Empire will feel right at home - I certainly did. (4/5)

Under the cut: reviews of Drones, The Infinite Loop, The Life After, and Uncle Scrooge.

In Las Vegas, two US military drone operators accidentally stumble into the world's first terrorism-themed hotel. While it's certainly an intriguing hook for a comic book miniseries, the sad truth is that in terms of execution it doesn't really work. The script by Chris Lewis is reasonably enough, albeit a little difficult to follow in a few places. Bruno Oliviera's art is, sadly, not quite ready for prime time. This is by no means a bad comic book, but certainly there are much better this week that probably deserve your money more. (2/5)

This really is a good week for trying out new IDW comics: this is the third issue one from the company in just one week. This book follows two agents trying to fix time anomalies through human history. It's odd, visually striking, funny, dynamic and packed with a lot of romantic flirting. Elsa Charretier's artwork really sells this one, and I suspect it's what will attract most of its readers. There's not quite enough for me to grab onto with this first issue, however, and it may take a second issue for the story to clear itself up and make a bit more sense. Until then I'm intrigued. (3/5)

I really liked what Joshua Hale Fialkov was doing with his DC series I Vampire back in 2011 and 2012. This new series by him, and artist Gabo, had somehow slipped past my radar, but I'm now intent on going back reading the earlier issues. This is a sort of foul-mouthed ultra-violent children's comic, that reminds me a little of Adventure Time only much coarser and bloodier. The book is about what happens in the afterlife, except as this issue opens the afterlife appears to mean a seven year-old child warrior fighting an enormous demon before getting rescued by an infinite number of rabbits. It's odd, bold, funny and beautifully illustrated - really it was that cover that grabbed my attention and made me want to have a look. (4/5)

Decades ago Carl Barks changed the face of Walt Disney's animated characters with his enormously iconic and successful Donald Duck comics. He created Donald's miserly millionaire uncle Scrooge McDuck, and breathed new life into Donald's three wayward nephews Huey, Dewey and Louie. So popular were Barks' books that they've been in print around the world pretty much consistently ever since, and Walt Disney Television adapted the set-up for the hugely successful animated series Ducktales. Now it's IDW's turn to pick up the baton and run with that legacy as they launch Uncle Scrooge #1, the first in a whole new series of Walt Disney comic books. From the credits I'm guessing this is an English translation of the Italian Uncle Scrooge comics, which have continued to be published for years. It's great to see them translated into English. They're a fabulously entertaining read as well, with clear layouts and crisp artwork very much in the Barks tradition. Those looking for quality all-ages comic books should take note. (4/5)
Posted by Grant at 8:55 AM