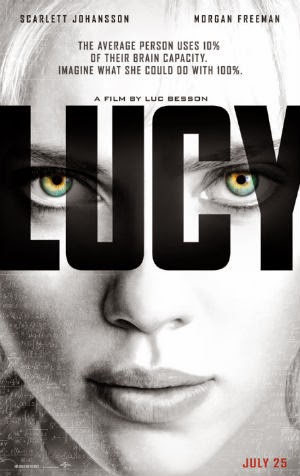 In Luc Besson's film Lucy, an unwilling drug mule (Scarlett Johanssen) develops extraordinary mental powers after she overdoses on the experimental drug she is supposed to be carrying.

It's possibly one of the stupidest science fiction films I have seen in quite a while, and it appears to very proudly wear that stupidity on its sleeve. It even hires Morgan Freeman to explain to the audience its faulty, wrong-headed ideas of how brains work. I'm being literal with that, by the way: the film actually requires Morgan Freeman to deliver a lecture to the audience explaining at length the sorts of weird telekinetic effects the title character is going to generate later in the film. With the science being complete bullshit, the term "info-dump" has never been more appropriate. Why the film didn't simply hand-wave what happens to Lucy I don't know - certainly it would have made for a much better movie.

Once you jump over this enormous hurdle, however, there's actually a lot of fun to be had. It's a ridiculous movie, but that means ridiculous chase scenes and action sequences, mean Korean gangsters and violent shoot-outs. It's just critical to your enjoyment that you never think, since it's not just the science underpinning the plot that frustrates but the plot itself.

The film spends a remarkable amount of time setting up the Korean gangsters, led by Old Boy's Choi Min-sik, only to render them entirely irrelevant by the film's climax. Then there is the realisation in the last few minutes of the film Lucy has grown so overwhelmingly powerful that she just could have stayed in bed for 90 per cent of the film and still had the ability to reach the same conclusion. It really is an odd plot, as if Besson (who both wrote and directed) put scenes from eight different action and science fiction films into a blender and filmed whatever it poured out. On a moment by moment basis it's a lot of fun, but the moment you pause to think about it the whole production collapses like a set of cards.

Scarlett Johanssen does a great job in the lead role: she's smart, engaging and funny, and to a large extent saves the film from itself. Choi is also in fine form as the villainous Mr Jang, although really it's a part that requires him to make deadpan faces while murdering people. He feels a tiny bit wasted. Morgan Freeman, on the other hand, is entirely wasted. He delivers one of those performances where you can actually see the guilt in his eyes. I don't think he's ever been this underwhelming in his entire career, and I suspect that he knew it while he was taking the pay cheque and delivering Besson's horrendous plot exposition.

I remain a big fan of Luc Besson. I love his visual style, and that's certainly in effect here. I love his sense of casual whimsy, and that's certain here to an extent as well. What's missing is the strength of character and the boldness of plot. There's a climactic shoot-out between French police officers and Korean gangsters which reminded me more than once of Leon (aka The Professional), and that's a shame because it made me desperately wish I had been rewatching Leon instead. At the time you may find a lot of fun to had with Lucy. I certainly did - but then I had time to think, and the entire film fell apart in my mind.
Posted by Grant at 5:13 PM