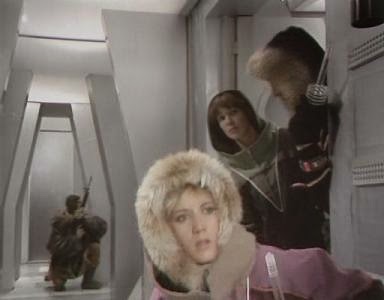 Blake (Gareth Thomas) travels to an ice-covered planet to rescue Avalon, a resistance leader who has been inciting rebellion against the Federation on several worlds. He is unknowingly walking into a trap: Space Commander Travis has already captured Avalon, and has set up a special operation to kill Blake's crew and recover the Liberator for Space Command.

"Project Avalon" is a solid and entertaining episode of Blake's 7. It has some clever ideas to it, and doesn't really do anything wrong. Certainly it's not the most original hour of television ever made, but it has a clear goal and successfully achieves it. It also promises something of an expansion to the series format; an expansion that, in the main, doesn't extend much further than it does here.

Blake has come to rescue Avalon and assist in her growing rebellion against the Federation. There's a real sense from the episode that we're seeing Blake's legend grow and actually have real weight with the people of the Federation. Servalan (Jacqueline Pearce) arrives to supervise Travis' latest scheme to trap and kill Blake specifically because he has become such a threat. There has been an evolving scale to the series up to this point - a first strike in "Time Squad", a bigger attack in "Seek Locate Destroy", mention of Blake's growing popularity in "Duel" - and "Project Avalon" seems to take it to the next level. Except when it doesn't. From hereon in it's mostly small-scale attacks and missions, and the size of Blake's crusade largely doesn't expand or evolve until Season 4.

Stephen Greif gives his finest performance here as Travis. He's ruthless and rather sadistic, but also calm and professional. It's the first and only real indication we ever get in the series as to why Travis was considered an effective choice to hunt down Blake at all. It's a shame the character declined so badly after this, since here he shows a remarkable amount of depth. He plays so well opposite Servalan as well, who in her second appearance in the series remains a fairly cold and professional sort of character - this will change dramatically. The episode also features Servalan's first meeting with Blake.

When Blake, Jenna and Vila rescue Avalon, their escape turns into  frantic run-and-gun chase. It's remarkably well staged given the episode's limited budget, and actually manages to be a rather effective and dramatic sequence. Director Michael E. Briant had already worked on several key serials in Doctor Who, so was likely well versed in drawing as much drama as possible from a finite amount of resources. The scene, with Blake and Jenna ducking round corners and downing a seemingly endless stream of Federation troopers, is highly reminiscent of scenes in George Lucas' Star Wars. I'm sure it's no coincidence the episode was produced shortly after that film opened in British cinemas.

This is a really strong action-focused episode. So far this season there have been nine episodes, with six of them getting the tick of approval. The quality ratio is rising; this time to 67 per cent.
Posted by Grant at 10:34 PM