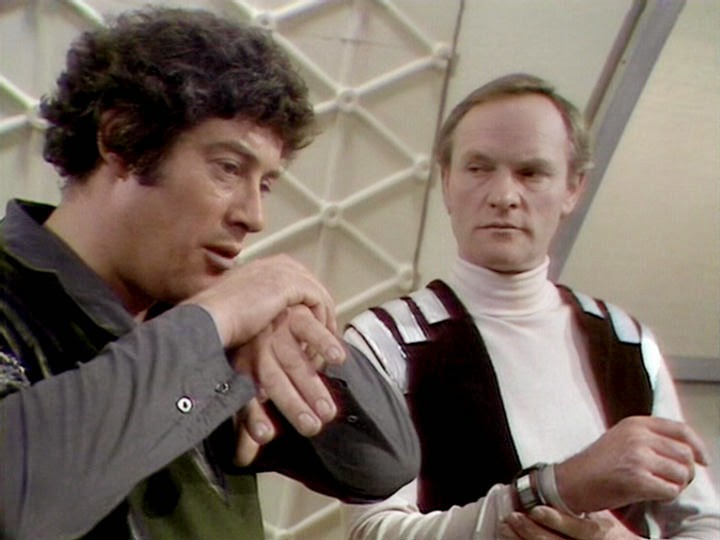 Gan begins to suffer blinding headaches, which then send him off into a homicidal rage. With his limiter implant failing, Gan desperately needs surgery before he dies - but can the Liberator get him to a medical station in time?

"Breakdown" is a strange episode in that the narrative is split cleanly into two distinct halves, and neither of them get sufficient screen time to work. The first half is dominated by Blake's race to get the Liberator to an independent scientific research station - the blandly named XK-72 - before the pressure in Gan's brain kills him. The second half is dominated by events at XK-72 itself, and whether or not Avon is about to jump ship and abandon his crewmates for good. The episode's a hell of a mess, all things considered, and not very enjoyable to watch.

Part of the problem is that many of the ideas that formed this episode are genuinely good. Take Gan: we've known for several episodes that the Federation implanted an electronic device into the back of his skull to manipulate his brain and prevent him from killing people. Now that it's failing, Gan has transformed into a violent psychopath. It's actually quite a troubling idea, since he doesn't simply slip into a blind rage: he becomes a manipulative and fairly devious psychopath. He visibly enjoys his attempts to kill his friends when not sufficient restrained or drugged. The big question is: has the limiter's malfunction changed his personality, or is this Gan's actual unrestrained personality? The idea that Blake is travelling around with and relying on what is essentially a serial killer is a tremendously provocative idea, and it's a real shame that this idea wasn't developed further. And poor David Jackson: he finally gets an episode based around his character, and he's hardly conscious for the bulk of it.

When Blake and the other members of the team debate where to go to find help, it's Avon who reluctantly suggests XK-72: it's an independent research facility away from the Federation, and he's been planning to go there for some time to leave Blake and escape the Federation. Travelling there in time means taking the Liberator through an uncharted region of space - and the ship's computer Zen is so resolutely against going through it that he shuts the entire shipboard computer system down. Trying to override it only creates more problems, as the lack of computer systems to keep the ship's complex machinery in synch threatens to throw the whole vessel permanently out of control. Once again this is a great idea, and for a few minutes the episode (written by Terry Nation and directed by Vere Lorrimer) actually becomes slightly frightening. You easily forget how alien the Liberator is until it's main computer decides it's not going to obey your instructions any more, and won't tell you why. An episode that properly explores the ship is long overdue at this point, and while "Breakdown" offers some intriguing hints the storyline gets annoyingly truncated halfway through the episode.

And so to the second half, featuring Julian Glover (The Empire Strikes Back, Indiana Jones and the Last Crusade) as Kayn, the neurosurgeon roped in to operate on Gan's limiter. Once again there's a lot of potential here: Avon is fully intent on abandoning Blake, but Kayn has already alerted the Federation to the Liberator's arrival. There could have been a lot of subterfuge bouncing back and forth here, with the viewer unable to trust Avon or Kayn's motives. Once again, however, it's all over about as soon as it began.

Messy, haphazard and truncated, "Breakdown" simply fails to gel together. In the end it's all a massive disappointment. It leaves Season 1 with six good episodes out of ten: a quality ratio of 60 per cent.
Posted by Grant at 6:45 PM