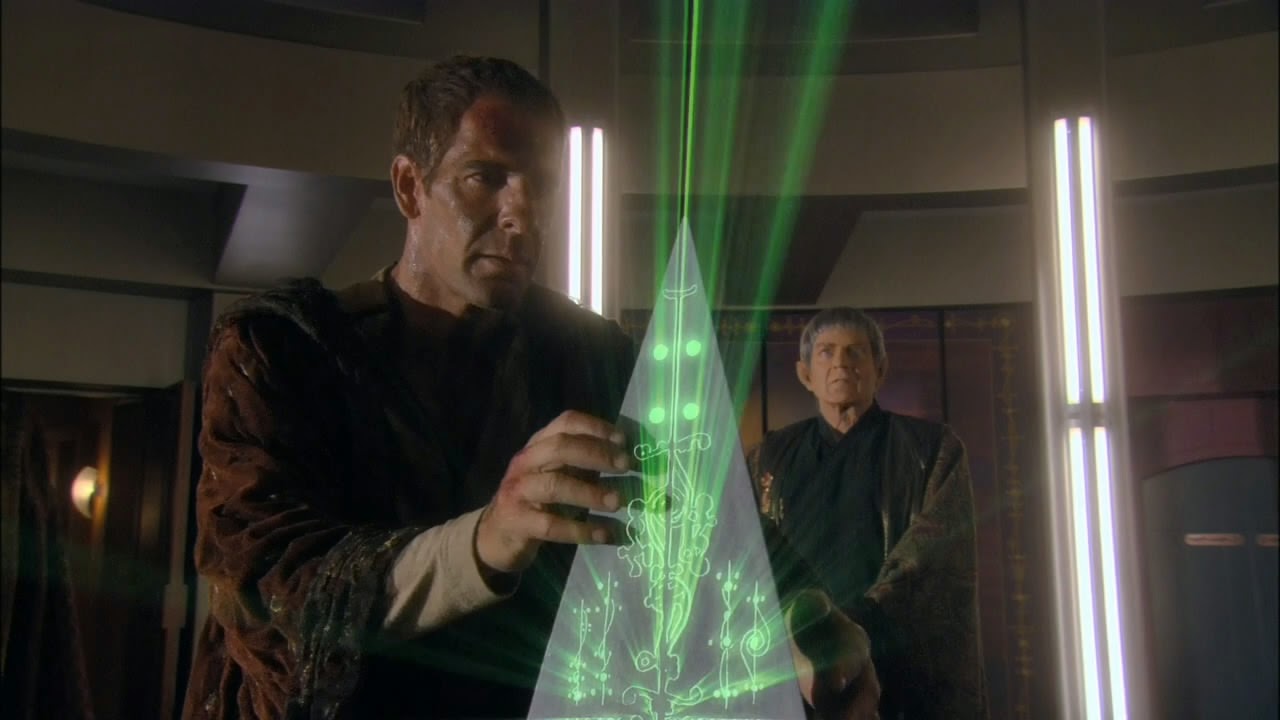 While Commander Tucker (Connor Trinneer) and Ambassador Soval (Gary Graham) head into Andorian space to prevent an interstellar war, Captain Archer (Scott Bakula) and the Vulcan agitator T'Pau (Kara Zediker) make their way across the Vulcan wilderness in a race to reach the capital.

This episode concludes the second Enterprise Season 4 trilogy, and it suffers many of the same problems. Put simply: there's not enough plot included to stretch out to 120 minutes, and there's too great a reliance on shoe-horning in every continuity reference and callback imaginable. The result is an episode where one spends a lot of time drumming one's fingers - save for the moments where one is throwing things at the screen.

"Kir'Shara" has a major problem running right the way through it, and that is that - despite the episode's overt reliance on and exploitation of pre-existing continuity - it gets the Vulcans completely wrong. They dissemble, they lose their temper, they plot violent interstellar wars. In short they do everything that almost 40 years of continuity, including many episodes of Enterprise itself, went to great pains to declare Vulcans never ever do. The episode ends with the declaration of a new peaceful society for Vulcan - only in the context of the franchise overall it makes absolutely zero sense. Every other iteration of Star Trek, including earlier episodes of Enterprise, make it pretty clear that the teachings of Surak and the path of logic are things that the Vulcans have followed for centuries - not decades, and certainly not beginning here.

Jeffrey Combs returns as the Andorian Commander Shran, who turns up, meets with Tucker, kidnaps and tortures Soval and then gets a short angry lecture as if he's been a badly behaved child. Combs does great work with what he's given, but the series really pushes the character into a fairly nasty corner and then obstinately refuses to address the consequences.

Two odd things happen in the episode's final moments. Firstly, T'Pol receives a visit from her husband where he releases her from their unhappy marriage. It's an odd moment because they were only married seven episodes ago, and their relationship has barely received a mention since. It's all rather throwaway, as if the writers realised they'd made a mistake marrying her off and simply cut the storyline off as soon as they were able.

Secondly there's a rather unexpected epilogue in a cavern where the defeated Vulcan leader V'Las meets with a Romulan secret agent. This throws up all manner of difficult questions for the series going forward: one assumes it was placed in there as a teaser for a future storyline, except the 1960s Star Trek made it definitively clear that no one - Vulcans included - had any inkling of who the Romulans were prior to the 23rd century. Obviously Enterprise's cancellation cut off any chance of this storyline being advanced. All things considered, it was probably for the best.

Another disappointing episode brings the quality ratio of Season 4 down to a worrying 44 per cent. I'm really not a fan of this new dragged-out, continuity-obsessed style of Enterprise. I keep hoping things will improve, but with 13 episodes to go and nine of them forming multi-part stories I'm not hopeful.
Posted by Grant at 5:04 PM