The X Files: "The Jersey Devil" 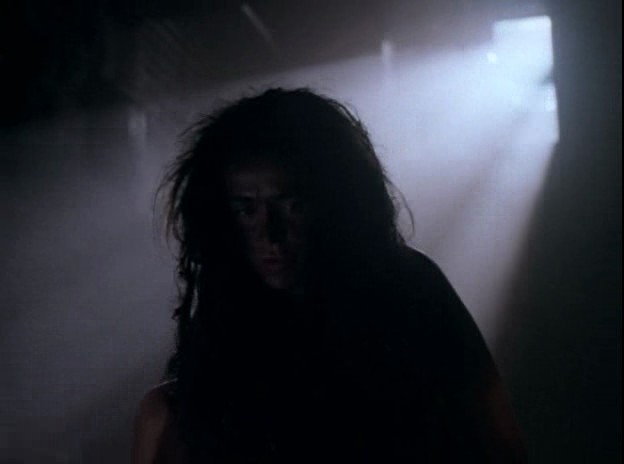 In "The Jersey Devil" Mulder and Scully travel to Atlantic City, where a dead body has been found with its arm missing. When it becomes clear that local law enforcement don't want the FBI around, Scully returns to Washington while Mulder goes rogue - investigating the possibility of a Neanderthal-like "beast man" hunting the streets at night.

With the announcement that The X Files was returning to television with six all-new episodes, it seemed appropriate to jump back and revisit some old episodes. I started a rewatch of the series some time ago, but stalled after four episodes because I knew the fifth was "The Jersey Devil". There's no point in beating about the bush: this is a really awful episode.

If you were going to write a list of all the paranormal phenomena that Mulder and Scully could possibly encounter in a series such as this, your initial list would almost certainly include Bigfoot - the popular myth of a North American humanoid beast that roams the woods, somehow almost entirely unseen by human beings. Now in my opinion a smart writer would strike Bigfoot off their list immediately, because the creature has something that UFOs, ghosts and liver-eating mutants simply don't have. Bigfoot is really, really stupid.

I mean really stupid. I'm not saying that writing a decent episode about a missing link between apes and humans roaming around the New Jersey countryside is impossible to write, but I am saying that nine times out of ten any attempt is just setting yourself up for failure. Chris Carter's attempt flounders entirely: the "devil" is almost entirely unconvincing, the supporting characters are wholly comprised of stereotypes, and the plot manages to highlight every cliché of The X Files going forward - and it's only the fifth episode produced.

Scully gets a weird subplot in this episode where she goes to a child's birthday party and meets an attractive man. It feels like either an experiment - essentially Carter trying to work out if there was space in the series to showcase his cast's private lives - or a fait accompli - Carter shoe-horning in a love interest at the behest of his TV network. Either way it really doesn't fit the tone of the series, and we see very few scenes like it going forward.

In many respects The X Files is a series that achieved a miraculous jump over its own material. It could easily have been a tacky-as-hell, immensely tedious chore to watch. Basically "The Jersey Devil" is the episode that shows what the series could have been like, had its writers not strived to find something above and beyond its basic presence.

So there it is: The X File's first unmitigated failure. I watched it again so that you never have to. We're five episodes in, and "The Jersey Devil" has spoiled the series' perfect record and dragged the quality ratio back to 80 per cent.
Posted by Grant at 8:46 AM