Robin of Sherwood: "Robin Hood and the Sorcerer, Part I" 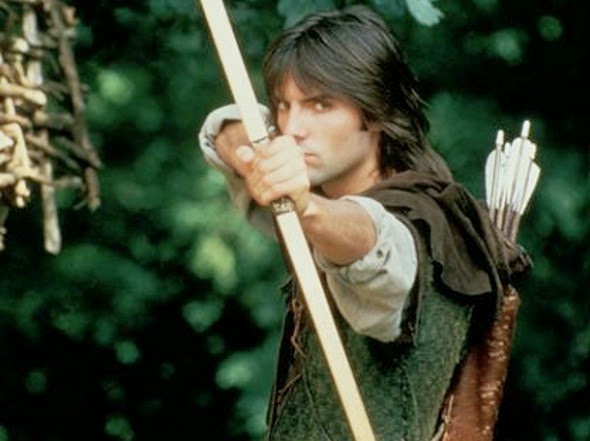 Years after his father was killed in an attempted rebellion, Robin of Loxley (Michael Praed) and his best friend Much are captured by soldiers for poaching the king's deer. After escaping from Nottingham Castle with a group of outlaws, Robin is confronted by the god-like figure Herne the Hunter and discovers his destiny to defend England and its people from those who seek to oppress them.

Robin of Sherwood is, for me, a high water mark for Robin Hood adaptations. It was an iconic series of 1980s British television, for a number of reasons, and for me it's one of the most distinctive and effective tellings of the Robin Hood myth I've ever seen. It works because it treats the myth with an uncharacteristic seriousness, and because it blends medieval adventure with outright fantasy. This isn't just a story of a bunch of forest-dwelling outlaws robbing from the rich: it involves pre-Christian British mythology, demon-worship and witchcraft, magic, illusion and golems. It's pretty much exactly how one should approach this kind of well-worn story: bold ideas, a fresh angle and a well-honed, high-class production.

This first episode - the initial two-parter was originally broadcast as a 100-minute TV movie, but they're separated on DVD - hits a remarkable number of touchstones of the myth in fresh, often quite dark ways. Robin doesn't simply become Robin Hood, he is anointed as "the Hooded Man" by Herne, a hermit who lives in the forest and displays godly powers whenever he puts on his enormous deer antler-endowed hat. Herne the Hunter is a perennial mythic figure within British culture, and by tying him into Robin Hood's backstory series creator Richard Carpenter (Catweazle) immediately gives the series a huge boost in terms of atmosphere and tone.

Part of the episode's appeal is seeing the popular "Merry Men" be introduced one by one in fairly original ways. Much the Miller's Son is Robin's childhood friend. Will Scarlet (a surprisingly young Ray Winstone) they meet in Nottingham gaol - soldiers raped and killed his wife, and his murderous reprisals earned him the nickname "Scarlet". Little John (Clive Mantle) encounters Robin at a river crossing, and they have the fight with quarterstaffs as the legend generally tells it - only this John has been possessed by evil spirits at the hand of the episode's villain, devil-worshipping Baron Simon De Belleme.

The episode doesn't waste time with introductions either. In the space of 50 minutes we see the Sherwood and Nottingham setting, establish the fantastical parameter of this particular version, and meet Robin, Much, Will Scarlet, Little John, Maid Marian, Friar Tuck, fellow Merry Men Tom and Dickon, the Sheriff of Nottingham, the Sheriff's brother Abbott Hugo and the henchman Sir Guy of Gisburne. It introduces all of them in a fairly organic manner and manages to make each introduction feel fresh and engaging.

You could criticise the episode for being a little too serious and earnest - particularly given its rather on-the-nose musical score by Irish band Clannad - but it's a consistent tone and the episode is unwavering in sticking to it. All up it becomes wonderfully entertaining stuff. There have been countless adaptations of Robin Hood for film and television over the last 80-odd years. Robin of Sherwood remains my favourite.
Posted by Grant at 8:59 AM